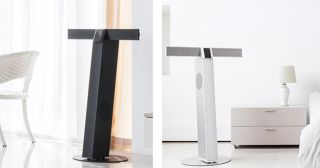 The AKT1 supports hi-res audio up to 24-bit/192kHz and can play audio from optical and auxiliary inputs, or a microSD card. And that's just for starters.

Streaming is supported in any number of ways thanks to the inclusion of Ethernet, WiFi and aptX Bluetooth connectivity. Any DLNA device is supported for wireless streaming, from computers to NAS drives to portables, and you can play music straight from your phone or tablet using the AK Connect app for iOS and Android.

The system will also connect and stream from other A&K devices, such as the AK500N desktop player and the AK380 flagship portable player.

Inside the system you'll find six speakers: two 0.75in tweeters, two 2in midranges and two 6.5in woofers.

A hybrid combination amp means the tweeters are driven by an analogue amp while the mid/bass drivers are dealt with by a digital amp. A Cirrus Logic 4398 DAC is on hand for each stereo channel.

Astell & Kern says, "a variety of streaming services and Internet radio stations" are supported, including vTuner. Deezer is promised to be added shortly.

Control of the system comes either via the AK Connect app or using the 4in touchscreen - which looks not unlike one of the company's portable media players - on the system itself.

The Astell & Kern AKT1 will be available by the end of August and comes with a US price tag of $3,700. The UK release is expected to follow later in the year, pricing TBC.