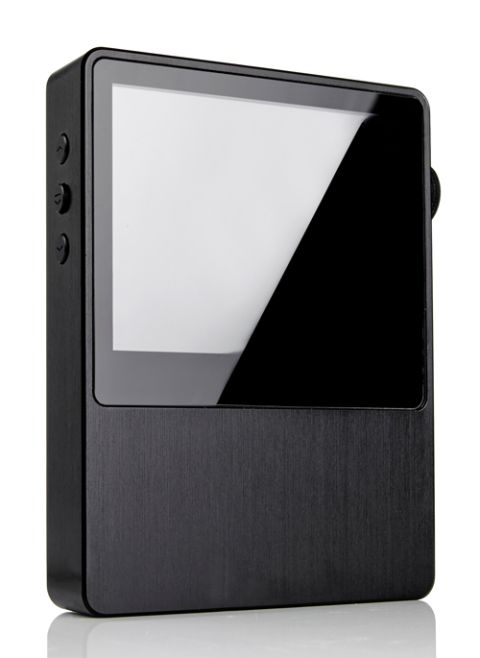 A seriously talented performer that has a few design issues

The AK100 MkII is the entry-level model, and its party tricks include expandable storage and support for DSD files.

Next to the Sony NWZ-ZX1’s brass cylinder and protruding back, the A&K actually looks a bit dull. Only the physical controls stand out: playback buttons on the left edge and a volume knob on the right.

This dial rotates with satisfying clicks, but is a bit wobbly. It’s also likely to catch on the fabric in your pocket and change volume. There’s a volume lock option within the menus, but if you use it you’ll have to turn the screen on every time you want to adjust the volume.

There’s a 2.5in capacitive touchscreen with a resolution of 320 x 240 pixels. It’s big enough to navigate the system, but a bigger screen wouldn’t hurt – it feels cramped against the Sony’s 4in offering.

There is 32GB of storage on board, but you can add more. A small door on the bottom edge slides open to reveal two microSD slots.

Official literature says the device is compatible with cards up to 32GB, but 64GB ones work if you format them using FAT32. That means you can have a maximum storage of 160GB at any time.

We’re disappointed the starting storage space isn’t a little more generous, because unless you have a tiny high-res audio collection you will need more than 32GB. The Sony is maxed out at 128GB, but that’s all built-in and available out of the box.

File support is very good: the AK100 MkII can handle WAV, FLAC, WMA, MP3, OGG, AAC, ALAC and AIFF. Unlike the Sony, the A&K is ‘DSD-capable’, which means it can also handle DSD64 files, altough it doesn’t actually play them natively – it converts them to PCM.

Touch an on-screen button and it can be unresponsive at first, only to react when you repeat the action – propelling you forward through a couple of menus. Faster microSD cards struggle less, but it’s worth noting these issues occurred even with a Class 10 (very fast) card.

Even when not playing DSD files, operation never feels particularly snappy. Scrolling is never smooth, and there tends to be a slight delay between a single tap and the corresponding reaction.

Going from menu to album selection to track selection and back, it’s not unusual to glimpse a countdown. It’s not problematic, but it is noticeable and easily outpaced by the Sony’s Android 4.1 Jelly Bean operating system.

Thankfully the interface is straightforward and doesn’t have too many pages to wade through.

The home screen has a settings button and six boxes: Songs, Genres, Albums, Artists, Folders and Master Quality Sound, where you’ll find all your high-res tracks laid out alphabetically.

It’s all very basic, but at least you’ll never get lost.

The journey from start-up to music playback isn’t flawless, but start listening and you’ll soon stop caring. The AK100 MkII is a very talented performer. It has an alluringly warm, smooth sound signature. There’s a good degree of tonal balance too, and the listening experience feels completely natural.

Rhythmically it loses out to the Sony, but it makes up for that with a stunning midrange. Here you get far-reaching, fluid dynamics that really complement vocal-based tracks. Load up Lorde’s Pure Heroine and her voice is direct, organic and full of life.

Combine that with bags of detail and the A&K is right up there with the Sony as one of the best-sounding portable high-res music players we’ve heard.

We’re very impressed with the Astell & Kern AK100 MkII, but there are issues.

It’s really expensive, and that’s not an easy price tag to swallow considering the need to spend yet more on memory cards (unless you’re happy with a paltry 32GB).

We’re pleased to see DSD support, but that’s offset by the sluggish interface.

It’s a shame, because we really like that audio performance. Overall it’s a good effort from A&K, but one that leaves room for improvement.