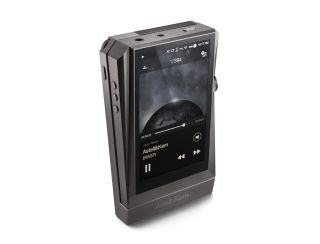 The AK380 builds on the company's previous flagship model, the AK240 by adding a raft of extra features and functionality, including dual 32-bit DACs and advanced jitter reduction. Astell & Kern is also introducing an optional headphone amp module, which the AK380 slots into.

You control the player through its 4in touchscreen. Built-in memory is 256GB, which is expandable via microSD card. There's also wi-fi connectivity, native DSD playback and Bluetooth connectivity. Battery capacity (and hence battery life) is larger on the new model (3400mAh against 3250mAh).

While the AK380 goes on sale in June for £3000, pricing and availability for the optional amp module is yet to be confirmed.