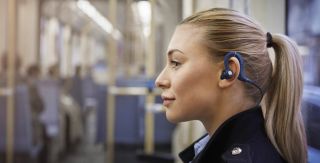 Denon has just launched the AH-C160W, a pair of wireless sport headphones. They're available in black, blue, and white - priced at £150.

So what's on the inside? Well, playing your music are a couple of 12mm drivers, and there's Bluetooth for connecting to your phone or music player.

The AH-C160Ws will also give you voice prompts to let you know when you're running out of battery.

You should be able to take these headphones out in all weather too. The electronics are treated with Nanofics protection, so they'll resist moisture up to the IPX5/7 standard.

They've also got the usual playback controls - which are raised slightly so you can feel for them when you're exercising - and a button to pick-up phone calls.

Denon also says that its "Clear Voice Capture noise reduction for phone calls" means that your voice will be better received, even in a noisy environment.