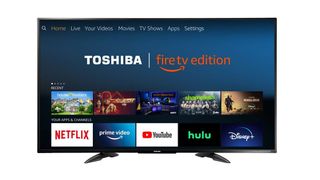 Cyber Monday TV deals have come and gone over the past few days, but this one's just arrived! And if you're after but have been holding out for a last-ditch Cyber Monday bargain, congratulations – you made a great decision.

Not only do you get a cracking 42 per cent discount on this TV, you also get a free Echo Dot (3rd gen) smart speaker thrown in, as well as 40 per cent off the first two months of a Sling TV subscription (valid for new subscribers only). In total then, you're saving around $350.

Want a slightly smaller 4K TV? The 55in version is also on sale with the same perks, priced just $300.