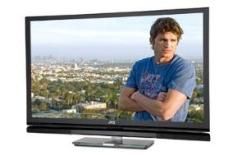 This JVC monitor is a fantastic product, but loses a star due to its lofty price-tag

Loads of people never use their TV tuner, such is the proliferation of Sky, Virgin, et al. That makes a screen without one appealing. Say hello to the JVC LT-42WX70EU.

This is a premium product with a stylish chassis and fine build quality. It's slim without the stand, just over 4cm deep. A speaker is included, but you can leave it off for an extra-slinky proposition.

Technical set-up is worth it
JVC says this Full HD monitor is largely aimed at custom installers and 'home cinema experts', so calibration is a rather technical affair. Take some time with the myriad options, though, and the results are hugely impressive.

Play the Dead Snow Blu-ray and the JVC produces a picture with brilliant contrast, combining supremely punchy whites against inky black backgrounds. Detail levels are excellent, revealing all the detail in the faces of the soon-to-be-zombie-food characters.

Where the JVC can't quite match the very best in class is in motion and colour-reproduction. There's just a touch of judder to fast motion and slow pans, despite 100Hz motion processing, and skin tones are a little rosier than those from the ultra-neutral Philips 42PFL9664.

Essentially, this is the closest rival to the Philips 42PFL9664 we've seen – and if they were the same price it would be a tough call between the two. As it is, the JVC's extra £500 makes the decision much easier.