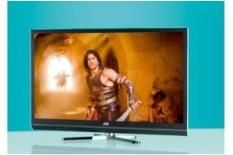 Despite the price and the looks, there’s very little for us to get excited about here

JVC seems to have the magic touch when it comes to producing class-leading projectors. It's a shame that in recent times the same can't be said for the company's flatscreen televisions.

While rival manufacturers continue to flood the market with numerous different ranges, JVC makes do with a small handful.

Clap your hands, say ‘hmm'
First impressions are that the JVC should be taken seriously: the two-tone design of pearlescent white and black puts it above similarly priced rival for style.

A smattering of touch-sensitive control buttons on the bezel add an air of sophistication too, although some of this work is undone by the ‘Hand Clap Function.'

That's right, you can turn this TV on or off, or mute and unmute it, with a couple of quick claps. In reality, the function doesn't work especially well, and you feel like a Flamenco dancer every time you attempt it. We'll stick with a power button, thanks.

To picture performance, and the JVC produces a dynamic high-definition picture. Whites have plenty of punch, but there are issues with blacks, which lack the depth of the class leaders.

Having said that, the image presented with the Blu-ray disc of Transformers: Revenge Of The Fallen is reasonably entertaining and vibrant, even if the actual film isn't.

Not as surefooted with motion
With TV and DVD, the set uses JVC's 100Hz Clear Motion Drive II technology, but this isn't as
surefooted as some of the other technologies on offer at this point in time.

Spin Return of the Jedi and as Boba Fett falls into the Sarlacc Pit, there's a noticeable shimmering and loss of definition – not what we'd expect here.

The JVC's Freeview picture is a little underwhelming too. There are no fatal flaws, but the top televisions around this pricepoint produce clearer, more composed and more desirable results, and some have Freeview HD, too. The built-in speakers aren't great either.

Even though its price is reasonable, the '42DV1 struggles to keep up here. We wouldn't call it a poor set by any means, but it's out of its depth.