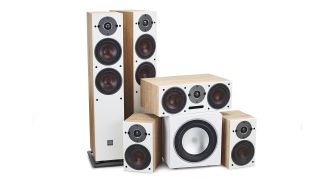 So you’re lucky enough to have the space, money and marital understanding to set up a surround sound system at home. Fantastic news! But what about that hi-fi system you already own and love? Or what if hi-fi sound is just as important to you as those surround sound movies?

The truth is that, when it comes to two-channel music, even the best AV amplifiers can’t hold a candle to the vast majority of stereo amps. And that's why the general consensus has always been that you need to decide whether your priority is stereo or surround sound, and sacrifice one for better performance with the other.

But there is a way you can have your cake and eat it. It’s not particularly difficult either, though it can be expensive if you’re starting from scratch. Read on for full instructions and a list of the best kit for the job.

The principle here is that you have two systems that meet in the middle, but don’t overly impact one another. That means you need two amplifiers; one for surround sound and another for stereo.

The surround amplifier (or receiver) needs to have pre-outs for the front-left and front-right speakers that bypass the unit’s own power amplification and output an analogue signal to the stereo amp. Pre-outs are pretty common on AV amps above £500 (we’ve listed some current models below).

In theory, a system such as this can be set up with any stereo amp that has standard RCA inputs, but ideally you want one that has a dedicated input for the task – one that bypasses the unit’s own volume control and other equaliser functions. On many amps this will be labelled as an AV input, but some also use proprietary names for the feature – ‘Main In’ on Onkyo amps, for example, and ‘Power Amp Direct’ on Pioneers. On Musical Fidelity amps, such as the M2si pictured below, the appropriate input is labelled 'HT'.

Why is this feature useful? By bypassing the stereo amp’s own volume control the AV amp is in complete control of the volume and has more control over sonic character. All volume controls add a small amount of distortion and affect transparency, too, so removing one is almost always a good thing.

If you’re set on using an amp that doesn’t have a dedicated AV input, you can do so by setting the volume control at the same level whenever you want to use it in tandem with your surround amp. That’s a more fiddly and less precise way of doing things, but it works just fine.

Of course, you also need speakers. Here, it makes sense to choose a surround package that includes front-left and front-right speakers with proper hi-fi credentials. There’s no point in going down this route if you’re only intending to use small satellite speakers. We’ve recommended some suitable packages below.

How to set everything up

Once you’ve got your AV amp and stereo amp, wiring is pretty straightforward. Simply plug your front-left and front-right speakers into the terminals on the stereo amp, and all of the other speakers (centre, sub, surrounds and height speakers, if using) into the relevant terminals on the AV amp. Then use standard analogue interconnects to connect the front-left and front-right pre-outs of the AV amp to the AV input of the stereo amp.

Now you need to calibrate the speakers using the AV amp’s built-in, mic-driven set-up. In most cases, you’ll need to tell the AV amp the speaker configuration you’re using, whether that’s 5.1 or 7.1, or even 7.1.4 (for Dolby Atmos), but with many amps you won’t need to specify that you’re using the pre-outs at all. On some AV receivers, particularly higher-end ones, you’ll find an option called something like “amp assign”. Use this to tell the AV amp that you’re using an external amp to power the front two speakers. Consult the manual if you’re not sure.

Once done, you can begin the automatic speaker calibration as normal, checking that the test sounds are coming out of all speakers as expected, and that there are no error messages that might indicate a mistake in the wiring or amp assignment.

At the end, you should have a perfectly balanced, volume-matched surround sound system, just as you would if all of the speakers were connected directly to the AV receiver. Now connect all video sources (Blu-ray player, Sky, games console, video streamer, etc) to the AV amplifier as normal, and all two-channel music sources (turntable, CD player, music streamer, etc) to the stereo amp.

The major benefit here is a big one: because all two-channel sources are connected to the stereo amp, which exclusively powers the front-left and front-right speakers, they completely bypass the surround components. This is pure, unadulterated hi-fi, but you also have a full surround sound system for a properly cinematic experience.

Also, in some cases, by using an external amplifier for two of your speakers, your AV receiver’s own internal amplifiers can be directed to power other speakers, opening up the option for a surround system with more speakers. The Yamaha RX-A3080, for example, has nine built-in amplifiers (plus two subwoofer outputs), which you can deploy in a maximum 7.2.2 configuration. Take responsibility for powering the front-left and front-right speakers away from it, though, and it can use those two ‘spare’ amplifiers to add two further Atmos speakers in a 7.2.4 arrangement. Nice.

One issue with a system such as this is that while the auto calibration of an AV receiver is designed to balance the volume and tonality of different speakers in a surround package – and will apply the same principle to the speakers being powered by the stereo amp – there are limits to what’s possible and some of the stereo amp’s character is likely to come through.

This can result in slight sonic inconsistencies between the speakers running through the stereo amp and those that aren’t, which you might notice (particularly across the front three). However, this can be minimised with judicious system matching and, for many, any slight flaw is more than made up for by the purity of the hi-fi experience.

The other drawback is price. Stereo amplifiers with dedicated AV inputs actually start at reasonable prices (Onkyo's A-9130 is just currently just £299, for example), but you’re still talking about paying that on top of the price of an AV receiver. Some may argue that if you’ve got, say, £1500 to spend on an audio system, you should get the best AV receiver or stereo amp you can afford, rather than compromise on both.

But there aren’t many AV amplifiers out there that do a really good job with stereo music. And a two-channel hi-fi obviously can’t do surround sound at all. That’s why this best of both worlds approach is so appealing.

If you’ve got the money, appetite and a little bit of patience, building a system that includes both an AV amp and a stereo amp makes all sorts of sense.

Convinced? Below you’ll find a list of current products that offer the necessary features from some of the biggest manufacturers in hi-fi and home cinema. Good luck...

AV amplifiers with pre-outs that can be used to connect a stereo amp: