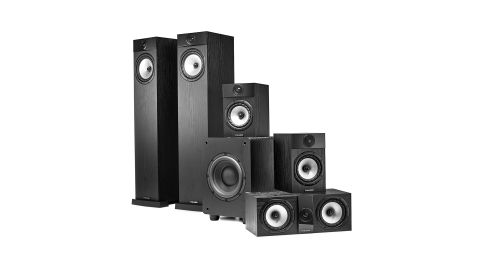 Fyne Audio was keen to create a floorstanding package costing less than a grand; they’ve designed one well worthy of being on your shortlist

There are times when you can get a pretty decent idea of how a product might fare even before you’ve picked up the scissors to open the box.

This Fyne Audio speaker package is a good example. Incorporating its Award-winning F302 floorstanders as right and left channels, and costing less than a grand, we’d be surprised if this suite’s performance warranted anything less than three stars.

But in reality, it’s better than that. Given that our previous experience of this fledgling company’s output has been nothing short of outstanding, we’re certainly more pleased than surprised.

So lets start with those speakers we already know are class leaders. A two-way, rear-ported design, the F302s house a 25mm polyester dome tweeter and 15cm multi-fibre mid/bass driver in each of their relatively sturdy cabinets.

There is further detailing surrounding the bass/mid driver too. More than mere aesthetic flourish, this tyre-like design aids solidity and makes it more difficult to distort, in a similar fashion to twisting or folding a sheet of paper.

The design is mirrored in the F300 standmount speakers that make up the rear channels in this package. The mid/bass drivers are marginally smaller here, measuring 12.5cm in diameter.

The whole system benefits from trim design and a slender footprint, but the diminutive F300s are particularly ideal for wall mounting – saving both on space and the cost of extra speaker stands.

For the centre channel, the F300C essentially resembles the F300s as conjoined twins, with two of those 12.5cm drivers tethered by the same 25mm dome tweeter. The F3-8 subwoofer, meanwhile, houses a 20cm driver and down-firing reflex port, with 450W of Direct Digital amplification in a 26-litre cabinet – enough to give the performance scale, while also fitting nicely in a modestly sized room.

As a package, the F302 AV is made more enticing by being so easily accommodated, but don’t assume that has come at the price of sound quality. While this is the first Fyne Audio product not to receive five stars, that’s more to do with the strength of its opposition; it’s still an engaging listen for the money.

When we first heard the F302s, we praised a presentation that avoids the pitfalls of many entry-level floorstanders, which sacrifice texture, spaciousness and timing for a bass-heavy performance – and it’s a pleasure to discover Fyne Audio’s attention again being paid to sophistication ahead of sensationalism.

As a whole, the package is as swift and agile as its illustrious front channels, wrapping us in a tonally balanced and fleet-footed sound. The F3-8 sub supplements the soundfield with a sturdy floor of bass weight, while maintaining that pace and level of detail.

Fyne Audio suggests that those wanting to double down on low-end presence from this package might be best served adding another F3-8 sub, rather than upgrading to one of the company’s larger floorstanders. Given the F3-12 is double the price, for those who could accommodate a second sub it would appear to be sound logic.

Our only minor qualm with the package is the level of expression offered by the F300C and, to a lesser extent, the F300s. If they were any less than good this package would not have received a four-star review, but they just don’t match the excitement of their Award-winning cousins.

The centre speaker is where much of the action happens, and while vocals are still interesting and given depth of character, their presentation isn’t quite at the same level as the Q Acoustics 3050i 5.1 Cinema Pack.

It is a shame, given Fyne Audio’s evident prowess in creating entertaining loudspeakers, but producing class-leading products across the board at first attempt might be expecting too much from such a youthful company.

It just means taking a little care with system matching. If you’ve a spritely enough home cinema amplifier – a Sony STR-DN1080, for example – you’ll not be lacking for enthusiasm; just don’t pair the F302 AV with anything slovenly or subdued.

If you’ve an extra £350 sitting in your bank account, the Q Acoustics set-up is our choice; for a floorstanding speaker package costing less than a grand, however, you can’t go far wrong with the Fyne Audio.

MORE: How to set up your AV receiver and get the  best sound