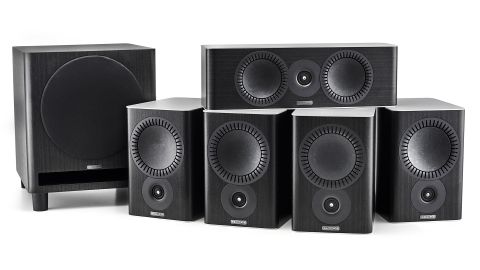 Before we’ve even set it up, the Mission QX-2 home cinema pack is already two-thirds of the way to a five-star review. Of the six speakers in this 5.1 bundle, four of them have received full marks as stereo pair for hi-fi listening. All we need is a subwoofer and centre speaker of similar quality and everything should be okay.

But unfortunately, centres and subs are a different proposition.

Read our Mission QX-2 speaker review and you’ll see many words of praise. Originally priced £399, but now down to £309, these affordable standmount speakers are a beauty. There are not two, but four, of them in this home cinema package to act as the front and surround pairs.

They may be standmounters, but don’t be fooled by their modest 32cm-high front facade. These speakers are almost as deep and that makes for a healthy amount of cabinet space. They come in a choice of four finishes – Blackwood, Rosewood, Walnut and White – finished with aluminium plates on the top and bottom panels to add solidity and to dampen unwanted resonance.

Mission has stuck with its Inverted Driver Geometry (IDG) driver format, which positions the tweeters below the mid/bass drivers. The intention is to equalise the distance between the acoustic centres of both drive units and the listener’s position to give a more focused and better integrated sound.

The drivers themselves aren’t exactly run of the mill either. The 15cm, soft pulp and acrylic fibre mid/bass cones are given extra support from the rear thanks to a larger point of contact with the voice coil. From the outside, you’ll notice that there are no dust caps and that the cone surface is also seam-free. The idea is to better maintain clarity in the midrange. The remaining single, smooth surface certainly looks tidy if nothing else.

Underneath that unit sits the 38mm ring dome tweeter. Its woven textile material is arranged in a double ring structure to reduce distortion. The back pressure from the diaphragm is vented from inside the two chambers.

The QX-C centre speaker comes off a lot less chunky with its elongated design. In the middle is that same 38mm tweeter with but with two 13.5cm versions of the mid/bass drivers, one on either side.

As for the sub, the QX-12SUB is a good sized box for a package at this price. It’s fitted with a single, 30cm, long-throw drive unit, a 300W internal amp and a set of rubber feet to keep this 23kg beast in good contact with the floor.

Anyone looking for a package with a low profile might want to take a look at the dimension specs of these speakers before they get out their credit card. The two pairs of standmounters are certainly not small.

Fortunately, the QX-2s take well to sitting close to the wall so they won’t have to encroach too far into your viewing space. Those and the QX-C centre are all rear-ported to augment the low-frequency output. The edges of the ports are ribbed to enhance airflow and avoid distortion at higher volumes.

We place them about 10cm into our listening room. It’s a fairly large space and, for us, that distance strikes a good balance between weight and clarity of sound. We’d recommend starting at the same point and moving in from there.

The sub is an even bigger consideration. It’s not something you can hide behind a sofa or fit under a coffee table. As a box roughly 40cm square, it more or less is the coffee table – and that’s before you account for the legs. Make sure you’ve got a spot where you can put it.

We partner the package with the five-star Denon AVR-X3600H, Epson EH-TW9400 and Panasonic DP-UB820EB Blu-ray player, and begin flicking through our library of discs.

We start our listening with Martin Scorcese’s classic, Taxi Driver. Bernard Herrmann’s score comes through just beautifully on these Missions. There’s scale and dynamism to the sound as the film opens. The meandering New York jazz comes sauntering through the speakers and across the broad soundstage.

Underpinned by big, open pulls on the double bass, it’s light and breezy until snares and cymbals swell the music into threatening crescendos reminding us of the danger that lies underneath Travis Bickle’s harmless looking exterior. Each time, the score drops easily back again to a quiet that’s so seductive that we forget how this story ends.

The script comes to life as Bickle interviews for his job at the taxi depot and it’s soon clear that the QX-C centre speaker is not the best match for the set. It sounds more closed-in than the QX-2s. The dialogue is a little muffled and it’s harder to hear the character in the voices.

We can understand their patter but we don’t get the sense of feeling of what’s behind Bickle’s safe, interview-friendly answers even when his mask slips for a moment. The centre doesn’t give us that vocal texture.

We move on to a recording of Metallica’s S&M concert with the San Francisco Symphony Orchestra. We pick out the second disc and head straight for Nothing Else Matters.

There is lots about the performance to get excited about. We get a fantastic sense of positioning right in the centre of the audience. There are whoops and cheers from all around as the crowd recognises the song starting up. We can sense the scale of the orchestra as the strings start up and we can feel the low notes of Kirk Hammett’s lead guitar hum through our hands on the sofa while our ears enjoy a decent level of detail from the top strings.

It’s a great sound – a big moment at a huge event, recreated brilliantly. It’s just a pity that it’s not matched by James Alan Hetfield’s voice from the centre when he begins. There’s little gravel to this vocal which we know is supposed to be rough, heartfelt and full of pain.

Lastly, we reach for alien invasion milestone movie Independence Day to test the effects ability of the Mission QX-2 home cinema package. The film may be 20 years old, but these speakers bring it right into the present.

Take the time to calibrate the levels on your AVR properly and you’ll find that the balance of the soundstage on this package is quite incredible. The sound is consistent from front to back and left to right. Missiles zip across space in the final dogfight above Area 51 with their weight and movement in the audio inch perfect. Everything from the high-pitched rattle of the machine gun bullets to the more mid-range alien laser blasts sound fantastic, and it’s all matched by a decent sub.

The Mission QX-12SUB delivers hits worthy of what a nuclear missile might sound like when exploded at the core of an alien mothership. It’s a big unit and its output is equally huge. It’s agile enough for some tight rumbles with a slight softness at the edges, though perfectly acceptable at this price point.

There’s an easy balance between the soundtrack and the effects too. The brass fanfares in the music, when down-and-out Russell Case rises to his moment of redemption, are pitch-perfect. We can’t help but feel our heart racing at the finale  – this is pure movie melodrama delivered with mastery by these Missions, and not even the mediocre centre can spoil the moment.

The music rises, his missile locks up, he looks at the photo of his family in the cockpit, “Do me a favour; tell my children: I love them very much.” I think we might have something stuck in our eye.

Four stars is a tough wrap for what is generally a very good home cinema speaker package. Five out of the six speakers involved are excellent but, with so much of a movie’s mix devoted to that channel, centres are crucial in film sound.

This one doesn’t maintain that same open and dynamic character as the rest of the family, and it’s easy to feel the gap that it creates in the space when the other units are so good.

The Mission QX-2 speaker package will provide your home cinema with all the wonderful music and surround effects that your viewing has to offer, but when watching a quieter drama, it will leave you wanting a little more.