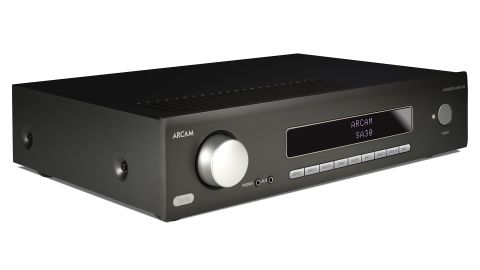 A superb combination of Arcam amplification and modern-day music streaming

Not everything is desperate to be seen for what it really is. Some go to great lengths to conceal their true identity – speakeasy bars, masked singers, Bruce Wayne – while others, such as this Arcam SA30, simply don’t feel compelled to show it off.

Based on its appearance, the SA30 could well slip into a line-up of Arcam amplifiers from the past few years. But while there are few aesthetic clues, this Arcam is actually a fully-fledged streaming system; a just-add-speakers product in the same vein as the Naim Uniti Atom.

Complementing its widely heralded Class G stereo amplification (120W per channel) with streaming architecture as well as digital and analogue inputs, Arcam has further satisfied the ‘complete stereo system in a box’ concept it first offered in the Arcam Solo Music several years ago.

While the Music Solo revolved around disc playback, the SA30 is more à la mode. Providing it is hooked up to a network via ethernet or wi-fi (once you have screwed in the supplied antennae), AirPlay allows music to be streamed directly from iOS devices, while Google Chromecast functionality caters for similarly straightforward, one-touch streaming from compatible apps such as Spotify, Tidal, Qobuz, Deezer and TuneIn Radio.

There’s also UPNP streaming. so that hi-res networked music from NAS drive can be accessed through Arcam’s dedicated MusicLife app or, alternatively, any third-party UPNP control app such as mConnect or BubbleUPnP. These are preferable alternative in our opinion, with Arcam’s own software being fairly bare-boned. Roon subscribers will see the Arcam as an endpoint option in the Roon app, too.

Not only is hi-res music supported by the Arcam’s 32-bit ESS Sabre ESS9038 DAC, MQA files, including MQA-formatted Tidal Masters, can also be played.

The Arcam’s streaming abilities may steal the headlines, but it's the physical inputs that can make the SA30 the nucleus of a multi-source system. Digital connectivity features two opticals and coaxials, one USB and an eARC-supporting HDMI. Turning to analogue it has three pairs of RCAs plus compatibility with both moving magnet and moving coil cartridges. We think that list ensures that pretty much any audio component or TV can be connected to it.

A pair of pre-outs allow the user to bypass the Arcam’s power amplification for an alternative, while an RS232 connection accommodates integration into a smart home automation system. A front-panel 3.5mm output provides headphones listening, too.

Plug in a pair of speakers or headphones and away you go... almost. Arcam has built support for Dirac Research’s proprietary Dirac Live room correction technology into the SA30, designed to correct the connected speakers’ performance for the system, and reduce unwanted resonant frequencies introduced by the room.

All you, or your dealer, have to do is download the Dirac Live desktop application (Windows or Mac) onto your computer, follow the procedure (which includes connecting the supplied mic, using it to measure 13 positions around your living room) and the software calculates and corrects the colourations.

You’re presented with a target response curve, which you can easily manually adjust before it’s loaded wirelessly onto the SA30. It’s an encouragingly straightforward process, and in our room does noticeably clean up the sound.

Naturally, in order to apply such room correction across inputs, the SA30 converts any analogue signals into a digital signal with its analogue-to-digital architecture, allowing it to be digitally processed before being converted back with its DAC. The Arcam’s Analogue Direct mode, however, bypasses that, sending the inputted signal straight through to the preamp stage.

While the SA30 has embraced the modern world of streaming, the aesthetics are in line with traditional hi-fi.

With a full-width chassis, and circular controls (a volume dial and power button) either side of a compact display, the SA30 embodies Arcam’s established design – conforming to the rest of the HDA component range it belongs to and away from the likes of Arcam’s elegant Solo Uno streaming amplifier.

We imagine anyone who relishes orthodox hi-fi design will appreciate the SA30’s aesthetic approach.

There’s nothing that points to its streaming talents: no sizable screen on which artwork can be displayed, nor are there the increasingly common touch controls or presets. Even the array of buttons that runs below the small LED screen sticks to standard functions such as menu, input switching, mute and balance.

It’s not ideal for visualising the track currently playing – watching letters slowly scroll across the display is about as visually painful as modern hi-fi gets – and we miss being able to occasionally glance at on-screen album covers.

The Arcam has all the sonic smoothness, scale and powerful muscularity we’ve come to expect from Arcam components and their Class G amplification. As we revel in its versatility – we stream our hi-res library from our Naim server, play Tidal and Spotify streams over Chromecast, and give our reference turntable a spin – we are thrown into the most consistently pleasant of easy listening states.

The Arcam’s rendition of L.A. Salami’s When The Poet Sings is full and clear and detailed: the tender acoustic plucking is lush and convincingly tangible, and his conversational vocal is engagingly dynamic, with all the quirky intricacies that make his storytelling so compelling left intact.

The Arcam’s appetite for vocals is exemplary. That pleasing clarity and subtlety is presented on a big, spacious and tonally even canvas – one that puts space between the melodic electric strings and the acoustic strums they sit on top of, without sacrificing their intended interplay.

While fast and fluid, the SA30 doesn’t quite have the rhythmic aptitude of the Naim Uniti Atom, which is the more gifted performer when it comes to tying together a pattern. However, the Arcam’s bigger, easier-going presentation will undoubtedly find favour with many listeners.

The SA30 is willing to offer the scale, openness and low-end impact to communicate the sinister tone of Bon Iver’s We, while also injecting the spaciousness necessary to keep the increasingly dense production nicely intelligible. It’s this sort of scale that really gives atmospheric instrumentals their fair due. Colours in Space sounds fittingly cosmic, the Arcam capturing the dimension and dynamic scope of the striking soundscape.

Of the seven digital filters available, we prefer the default Apodizing, although the others, which include Brick Wall, Minimum Phase Fast Roll Off and Linear Phase Slow Roll off, all offer subtle differences and are worth experimenting with.

The Arcam SA30 is a fine example of how well music streaming can be implemented into traditional hi-fi, and just how discretely too. Thanks to its integration of Chromecast, AirPlay and UPNP streaming, all you require is a control device (such as a phone or tablet) and pair of equally talented speakers (such as the KEF LS50s, Revel Concerta2 M16s or Fyne Audio F501s).

With the Arcam’s wealth of connections, existing sources can also be easily accommodated and delivered with its pleasingly open, smooth and detailed presentation.

It goes without some of the luxuries often adopted by modern streaming products – a fancy display, touch controls and fleshed-out dedicated app, for example – and ultimately, is outclassed by the class-leading competition when it comes to rhythmic ability. But the SA30 responds with a mature openness and clarity, and if that’s how you like your music, you won’t regret making it the heart of your system.