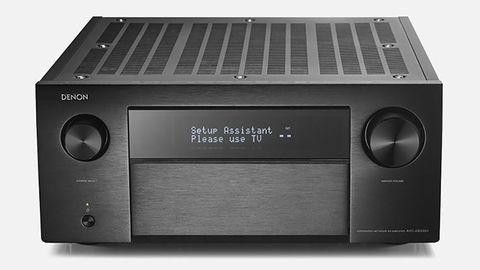 A powerhouse performance from a flagship amplifier with features to match

Denon’s flagship AVC-X8500H is a mammoth AV amplifier. Weighing 23kg, with a large-scale and powerful sound and 13 discrete power amp channels, the £3499 AVC-X8500H is sure to impress AV fans hoping to go big on their home cinema.

Denon claims this is the first fully 13.2 channel amplifier on the market – one that allows you to set up a 7.2.6 or 9.2.4 Dolby Atmos system without needing a second power amplifier for the extra channels. That alone might tempt hardcore AV fans looking to kit out the ultimate home cinema room, but the Denon’s expansive, muscular scale of sound is another draw.

We haven’t tested a flagship amplifier of this calibre in a while, so we put on a couple of our favourite classic test discs: The Dark Knight and The Matrix in resplendent 4K Blu-ray.

The Denon AVC-X8500H bursts into life during the corridor scene in The Matrix. The rapid gunfire and exploding concrete pillars make a glorious noise: loud, brawny, and punchy.

The scale of sound is immense. The X8500H has no problem filling a large room, with sound effects careering around you effortlessly. Scenes in a room have space to breathe, while rooftop shots feel vast and engulfing. With most amplifiers, there’s usually a lid on the soundfield, but the Denon soars beyond any expected boundaries.

The techno soundtrack is thumping and bassy, and the sparse dialogue cuts through the action cleanly. Despite the impactful sound, the Denon amplifier keeps its composure even when things go too loud.

MORE: 4K Ultra HD Blu-ray: all the discs on sale and coming soon

There are elements here that we loved in last year’s flagship, the Denon AVR-X6400H, including clarity and subtle detail, and it’s combined with a large dose of extra muscularity and power in the X8500H.

Punches in The Dark Knight hit like a clear and precise sledgehammer. Bullets hit with forceful impact and glass shattering is piercing, but the top end never goes bright enough to make you wince.

For some, this is exactly the balance they’re looking for in a home cinema amplifier: big scale, punchy impact, loud and powerful. For a flagship amplifier costing £3499, we want to be blown away in every single way – but the Denon ABC-X8500H doesn’t quite pull out all the stops.

For instance, the high-pitched, insistent whine accompanying every Joker scene should rise to a clear, unbearable crescendo that puts your teeth on edge, but the Denon AVC-X8500H holds back, dulling the sound. That strict, staccato rhythm charging through the opening bank robbery scene should be more precise to fully convey the mounting tension.

With the added muscle, the X8500H seems to have traded in a bit of the AVR-X6400H’s agility and rhythmic precision. The latter sounds more expressive, adding sparkle and attitude to dialogue that the X8500H doesn’t quite convey.

It’s arguably more engaging too, offering a snappy and agile sense of momentum that drives a tense scene along. But it’s also much smaller-scaled and thin-sound compared with the beefy X8500H.

This new Denon amp falls just short of being a true belter; it holds back on that last ounce of excitement in favour of a more composed sound. And that’s a shame, as we’d expect the new flagship to be a clear step above the previous one in every aspect of its performance.

The AVC-X8500H looks like every other black, rectangular AV receiver, but the build quality is solid as a rock. There’s something reassuring about a solid, hefty piece of kit, although you might need help lifting the bulky amplifier out of its box.

It’s built predominantly out of thick metal, with a substantial block of aluminium for the front panel flap feeling suitably impressive. The control knobs turn smoothly, and everything feels of a high quality. The responsive remote control is similar to the one found with the X6400H, but this one is backlit – that’s always helpful when the lights are down.

Setting up the Denon is a doddle. Plug in the set up mic, tell the amp exactly which configuration of speakers you have (select whether you’re using one or two subwoofers in the ‘channel select’ menu), run the calibration process at least three times for different listening positions (you can do up to eight) and then double check the results.

The X8500H’s speaker size, distance and level measurements are spot-on – so much so we didn’t really feel the need to recheck using an SPL meter.

MORE: 11 of the best film scenes to test surround sound

Putting the X8500H’s sonic performance to the side, having 13 discrete channels in one box is obviously the main highlight. It allows you to install six or four Dolby Atmos speakers on to a 7.1 or 9.1 speaker set-up, respectively, for an incredibly immersive bubble of home cinema sound. The amp also supports DTS:X up to five and seven channels, with support for the full 13 channels coming soon.

The back of the amplifier is entirely taken up by inputs and connections; you won’t find a spare inch amidst the 13 colour-coded speaker terminals and multiple analogue and digital connections.

The Denon flagship’s eight HDMI inputs are all HDCP2.2 certified, meaning it will handle native 4K/60p content and the most popular HDR variants (HDR10, Dolby Vision, HLG). If that isn’t cutting edge enough for you, Denon promises a future hardware upgrade to accommodate HDMI 2.1 – the next-gen spec which will allow passthrough of 8K content.

It also has three HDMI outputs, along with plenty of analogue AV connections, a handful of optical and coaxial inputs, a moving magnet phono input and a USB port in the front panel.

On the streaming side, the Denon amplifier supports everything from Bluetooth and AirPlay (AirPlay 2 is support coming shortly) to Spotify Connect, Tidal and Deezer, while its HEOS multi-room technology also sports Alexa voice control. You can stream audio in hi-res quality up to 24-bit/192kHz, as well as single and double speed DSD files.

Wondering why the X8500H is titled an “AVC” rather than the more usual “AVR”? The AVC-X8500 is called an AV amplifier rather than an AV receiver, for the simple reason that it doesn’t have an FM tuner built in (like the US model), so you can’t call it a ‘receiver’. It does have a tuner input in case you want radio reception, though.

There’s plenty to admire about the Denon AVC-X8500H. This is a grand amplifier with exhaustive, class-leading features and a cinematic scale of sound that will entice many.

It might not have grabbed our attention in every single way – especially for its price and flagship status – but it is a powerful beast and deserves an audition in your home cinema.