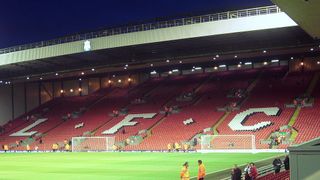 The Champions! Yes, the Champions League is back from its winter break and raring to go. Just 16 teams remain and, tonight, it's the turn of the champions themselves to overcome their 0-1 deficit in the tie - Liverpool vs Atletico Madrid. Below, you'll find all the information on how to watch a Liverpool vs Atletico Madrid live stream in top quality wherever you are.

The news is mixed but generally positive for Liverpool ahead of kick-off. Goalkeeper Alisson is still out with a hip injury but captain Jordan Henderson and left-back Andy Robertson both return to the team. Perhaps the biggest advantage of all, though, is that the Anfield crowd will be there in full voice to drag their side to victory.

Atleti, of course, make for stubborn opposition. Tradition dictates that they'll defend deep on their one-goal lead, ready to hit Liverpool with a counter-attack sucker-punch to stretch their advantage. As the away side, any further goals they score could start to cause the Reds a lot of problems

Fortunately, for Jurgen Klopp's side, this is not an Atletico Madrid in vintage form. The side has struggled to cope with the loss of Antoine Griezmann this season. They sit on the fringes of the European places, down in sixth place domestically, with just three victories from their last 11 games in all competitions. Liverpool will be hoping that their comeback win against Bournemouth at the weekend was the smelling salts they needed to wake up from their recent daze.

Tune into BT Sport 2 or BT Sport Ultimate at 8pm to find out how this one goes.

Football fans in Austria, Canada, Germany and Japan get the chance to watch the PSG vs Borussia Dortmund live stream for free. DAZN has the rights to show the Champions knockouts and a whole host of sports in these territories, and, best of all, DAZN offers a 1-month free trial. So long as you've not used yours already, then you can fill your boots.

Liverpool vs Atletico Madrid stream DAZN free trial
DAZN has the rights to the Bundesliga, UEFA Champions League, UEFA Europa League, US Sports, Fightsports, and much more live and on demand in Austria, Canada, Germany and Japan. Try free for 1 month. Cancel at anytime.View Deal

Sadly the DAZN free trial isn't available to those outside these regions. If you are a DAZN customer but travelling abroad, you'll need to sign up to a VPN service to make sure you can access the DAZN Liverpool vs Atletico Madrid live stream wherever you are.

Watch Liverpool vs Atletico Madrid live in the UK

You can watch Liverpool vs Atletico Madrid in 4K HDR, beamed at 50fps on BT Sport Ultimate, channel 433. If you're hooked up specifically on the BT TV platform then it's also available with Dolby Atmos sound.

Liverpool vs Atletico Madrid on BT Sport Ultimate is also available, minus the Atmos, for Virgin Media customers who subscribe to the BT Sport Collection. You can enjoy it in 4K HDR on channel 555.

Watch Liverpool vs Atletico Madrid live in the USA