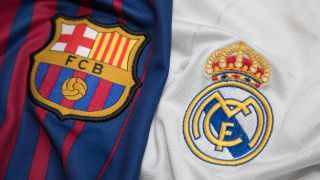 The new Spanish football season is upon us, and we have all the information on how you can catch live La Liga games – including many for free – wherever you are in the world.

Premier Sports have the rights to show Spanish football in the UK and Ireland in conjunction with LaLigaTV, and its sister site, FreeSports, will also show select matches entirely free of charge. Note that viewers outside the UK at the time of a game will need a VPN to access their Premier Sports or FreeSports stream.

Real Madrid are the current Spanish champions, finishing top of La Liga in July after a topsy turvy season that was halted midway through and ended without crowds due to the global COVID-19 pandemic.

Empty stadiums will be the rule at the start of this season, too, but that won't mean any less drama on or off the pitch as Madrid attempt to retain their crown despite the attempts of major rivals Barcelona and Atlético Madrid.

Barça ended last season in turmoil, losing 8-2 to Bayern Munich in the UEFA Champions League quarter-finals and keeping hold of Lionel Messi only due to an astronomical release clause fee, and have little time for new coach Ronald Koeman to implement his plans ahead of their season opener. Miralem Pjanic and Trincão have come in, but it feels like much has to change for the Blaugrana to regain their place at the top.

Atleti will see this as a chance to steal a march on their rivals, and have secured the services of Álvaro Morata on a permanent deal following his loan last season, while UEFA Europa League winners Sevilla could well be the surprise package when it comes to the 2020/21 La Liga title.

Read on to find out how you can watch all the games this season, wherever you are and however you want to watch.

Premier Sports has the rights to show Spanish football in the UK and Ireland in conjunction with LaLigaTV. Football fans can subscribe to Premier Sports on Virgin Media, Sky Sports or using the Premier Player web player platform.

LaLiga TV can be found on Virgin Media in HD on channel 554. It's available to all Premier Sports customers and any Virgin Media subscriber can sign up for £9.99 per month through their on-screen service – Home > Apps & Games > All Apps > TV Channel Upgrades on the remote. The bundle includes Premier Sports 1 HD (CH 551) and Premier Sports 2 HD (CH 552) as well.