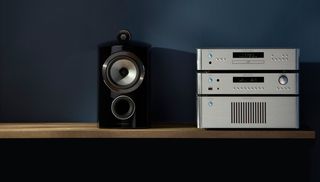 Rotel has launched two new amps, a CD player and a home cinema amp in its 15 Series range of 'affordable high-end' components.

Almost every component in the audio paths are 'through-hole' rather than surface-mounted. This gives Rotel a wider choice of high-quality components to choose from and makes upgrades or adjustments much easier.

All four also use high-end DACs, plus custom-designed external low-pass filters rather than the more prevalent lower-quality built-in equivalents.

The RC-1572 is a two-channel pre-amp. It uses relay switching for analogue sources to maintain integrity of the signal path, and features a 32-bit AKM4495 DAC for digital-to-analogue conversions.

It's joined by the RA-1572 stereo integrated amplifier. It features the same toroidal tranformer as the RC1572, which works with T-Network capacitors to give stress-free signal reproduction.

In terms of power, it packs 120W per channel into 8 ohms, and has a mono subwoofer output too. It has the same 32-bit DAC and Bluetooth aptX support.

The final new stereo item is the RCD-1572 CD player. Its Wolfson WM8740 stereo DAC supports 24-bit/192kHz and offers full differential voltage outputs, meaning the player can include both RCA and XLR outputs.

The new 15-series multichannel amplifier is called RAP-1580. It's a Dolby Atmos (7.1.4) and DTS:X -enabled design. It utilises similar oversize toroidal transformers to its two-channel siblings, and has six Wolfson 24bit/192kHz DACs for processing up to 11.1 audio channels, as well as eight HDMI inputs. All HDMI ins (as well as the two outputs) are 4K compliant, while three are HDCP 2.2, HDMI 2.0a and 10-bit HDR compatible too.

The display is a 7in TFT full-colour affair, there are balanced and unbalanced analogue inputs and even a moving-magnet phono stage.

We'll have a hands-on review of the RAP-1580 ready in time for the weekend.