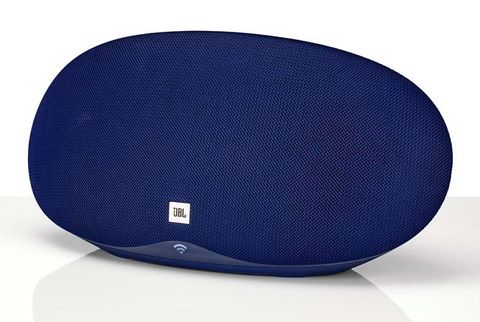 The Playlist is unmistakably a JBL product, with an enthusiastic, entertaining voice that will prick up many an ear

If JBL’s latest offering were an actual playlist, what would be on it? We thought REM’s Drive, The Stooges’ Fun House and Lou Reed’s I’m So Free might be decent places to start.

Sadly the latter doesn’t refer to the Playlist’s price, but the fact this wireless speaker comes kitted out with Google Cast makes it (figuratively) freer than any of its Bluetooth-only cousins.

MORE: What is Google Chromecast? Which speakers and TVs are supported?

There is still Bluetooth compatibility, of course, for when you don’t have access to wi-fi or want to play music from YouTube or iTunes, and an analogue aux connection for any non-wireless sources or for those who’d simply rather do things the old-fashioned way.

There are two main benefits of Cast. First, you have access to higher-resolution audio (the Playlist can handle up to 24bit/96kHz) and, because music is streamed from your network rather than your phone or tablet, you aren’t tethered to the 10m-or-so radius of a Bluetooth signal.

JBL has a reputation for building hardy wireless speakers with heft, and as we lift it from the box the Playlist seems no exception. It's over 30cm wide and weighs more than 1kg.

The Playlist conceals a pair of 57mm drivers behind its mesh grille, with a pill-shaped reflex port visible at its rear. We don’t particularly anticipate timidity.

JBL has long understood the benefit of simplicity when it comes to a product of this type, so but for the reflex port and a row of touch-sensitive controls on its top – for power, volume, playback and Bluetooth pairing – the chassis is free from clutter and confusion.

The first thing to do once you’ve plugged the Playlist in – this is a mains-powered speaker, so you won’t be able to take it outside with you – is to connect it to the wi-fi network via Cast.

It’s as easy as downloading the Cast app, holding down the play/pause button to let the speaker emit its signal and letting technology do the rest.

For playback, all you need do is open your preferred streaming service and press the Cast icon to begin playing through the Playlist, using your phone or tablet for skipping tracks and volume control.

It’s compatible with Spotify Connect, too, which we assume will be many people’s favoured source for this piece of kit.

We begin by playing BadBadNotGood’s album IV using Spotify Connect. The Playlist’s drive, promised by its physical bulk, is delivered - with a healthy dose of low-end action too.

There’s thick body to the ping-ponging mallets and laid-back rhythm track on And That, Too, with acoustic wind instruments dealt right to the front of the pack.

It’s an authoritative presentation too, with the opening glissandos of Speaking Gently performed with confidence.

All that warmth and stability really comes to the fore with vocal tracks, such as Samuel T. Herring’s on Time Moves Slow, and Hyssop Of Love featuring Mick Jenkins.

We aren’t looking for audiophile levels of detail or dynamics from a £150 wireless speaker, but there’s no chance of these tracks sounding lightweight or tinny.

There’s a strength and tenderness to the sound that makes the JBL sound more human than many of its competitors.

That bulk in the low-end doesn't skew the balance: it can make our table vibrate without neglecting the rest of the frequency range or mudding up the mix.

Not all of the Playlist’s frequency range matches the low end for quality, though. There’s a slight coarseness to the treble, which can stick out - especially at higher volumes - and becomes more obvious over longer listens.

Audio Pro’s Addon T3 isn’t a direct match in terms of spec or price – there’s no wi-fi and you’re paying an extra £20, though some of that is offset by its portability – but it highlights the kind of subtlety lacking here.

Less focused on the all-out entertainment that makes the JBL stand out, the Addon T3 offers a lighter, more agile touch when it comes to timing and dynamics.

Going back to Speaking Gently, the T3 demonstrates a more organised, coherent understanding of the percussive patterns that arrive about 40 seconds in. If we were to choose between the two to listen to over a long period, the more adept Addon T3 would win out.

That said, the Playlist certainly comes out on top if you’re after a more forward, enthusiastic presentation. The JBL feels more suited for a party, or somewhere where power and drive will be noticed for all the right reasons.

We have our reservations about the Playlist as an all-round performer, but it fits nicely into the JBL hierarchy. And its Google Cast compatibility can only be a benefit.

If you want your wireless speaker to ruffle your hair and push you about a bit, the Playlist has a firm enough hand.