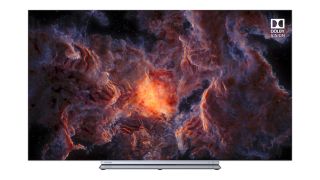 Toshiba means business this year - it's bringing no fewer than 18 4K TVs to Europe, including two flagship 55in and 65in OLEDs (the latter of which we got our hands on at IFA last September).

But before we get into the nitty-gritty of model numbers you’ll have forgotten by lunchtime, we’ll start with an overview of the features.

Toshiba is also offering Amazon speaker owners (i.e. Echo or Dot) hands-free voice control via Alexa for most of its UHD and Full HD models. You can ask your speaker to power the TV on or off, change and select channels or inputs, adjust volume, fast-forward or rewind.

In an effort to improve sound quality, the new Toshiba TVs have speakers tuned by Onkyo engineers and come equipped with DTS TruSurround HD virtual surround sound processing. The 4K OLED and 4K ranges go a step further with their audio accoutrements.

For example, the 4K U78 is designed with what Toshiba is calling ‘XSound Plus’ (which is, essentially, front-firing speakers), while the X98 OLED Series models have XSound Pro - larger built-in speakers and internal subwoofers.

Toshiba is also bringing a new interface to its smart TVs - it's designed to be more user-friendly and customisable, with streaming services across pop-up over-the-top bar at the bottom of the screen (much like onLG and Samsung TVs). Freeview Play opens the floodgates to Freeview HD channels and all the UK’s on-demand catch-up TV services, and Netflix is also onboard. Both services have shortcut buttons on the all-new remote.

In addition to the above, the flagship X98 OLED Series comprises 55in and 65in models, both of which are Toshiba ‘wide colour gamut’ TVs. They’re capable of displaying 99% of the DCI-P3 colour space, or 1024 shades per colour.

It’s a similar story with the 49in and 55in 4K U78 TVs, but they have LED instead of OLED panels and, as discussed above, a more prosaic speaker system.

A clutch of Full HD and, yes, even HD Ready models bring up the rear. Featuring the new Toshiba smart portal, remote and DTS TruSurround HD, the smart Full HD range spans multiple sizes between 24in and 49in. The HD Ready TVs come in 24in, 28in and 32in variants.

The 24in and 32in have integrated ‘slot and play’ DVD players, too.

Some of these TVs feature a ‘lean-back’ design with a fractionally tilted frame, low-set screen and flat stand base, too.

While we know the estimated prices for the 55in and 65in OLED TVs – £1600 and £3200 respectively – Toshiba hasn’t yet released price details for the rest. We expect them in in the next few weeks, which is also when we should see them appearing in stores.