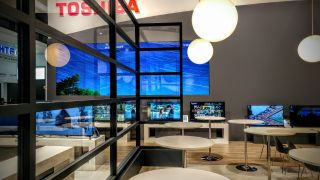 As strategic brand licensing deals go, the one announced today at IFA 2016 in Berlin by Turkish leviathan Vestel and Toshiba – which centres on the production and sale of Toshiba-branded TVs in Europe – makes a lot of sense.

Vestel, via its strongly budget-concious Finlux brand, has made decent European headway in recent years. The deal with Toshiba, though, will allow the company to compete in the mid- to high-end arena using a badge that still retains profile and cachet despite some recent, well-documented travails.

Liam La Cumbre, sales and marketing director for the newly created Toshiba TV Europe, told us the Toshiba brand is aiming to regain the 10 per cent market share the company enjoyed at the start of the flatscreen boom. “The new Toshiba ranges will sit above Finlux in terms of technology – HDR and Ultra HD are obviously the technologies to focus on.”

Toshiba will bring its design expertise to bear on Vestel’s proven technological prowess. Expect to see the Toshiba influence in effect at CES in January next year, on TVs due to market in the second quarter of 2017.