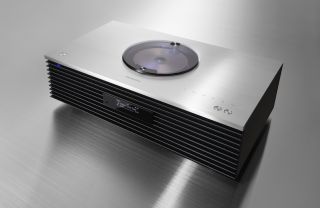 Historically, a Technics launch usually involves the unveiling of a turntable of two, but at the Munich High End Show the company has taken the wraps off a compact, all-in-one stereo system.

The SC-C70 is due to go on sale in September and features amplification, source, speakers and streaming smarts all in one box.

There's a top-loading CD player beneath the PMMA acrylic glass top panel, and the system also supports hi-res audio via DLNA and played through its USB connection, or wirelessly (and, of course, in lower resolution) via Apple AirPlay or Bluetooth.

Beneath the exterior, the SC-C70 features a trio of JENO Engines (Jitter Elimination and Noise-shaping Optimisation) which Technics claims eliminate jitter and remove distortion from the audio signal.

LAPC (Load Adaptive Phase Calibration) measures the phase and impedance of the five built-in speakers and adjusts the sound according to its readings.

Finally, Space Tune calibration software takes into account the system's surroundings and tweaks the sound to suit your listening conditions.

Although we've been told the system should be on sale in September, there's no word on pricing as yet.