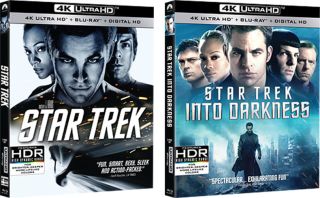 Paramount has confirmed its first two Ultra HD Blu-ray releases will be Star Trek and Star Trek Into Darkness. They are expected to be released on 14th June to coincide with the 50th anniversary of the first broadcast of the original Star Trek TV series, which aired on NBC on 8th September 1966.

Both films will come with Dolby Atmos soundtracks, mixed specifically for a home cinema environment, and will come in a three disc UHD/Blu-ray/Digital HD package. It’s also rumoured that Star Trek will come with a bonus Blu-ray disc of three hours of behind-the-scenes content, while Star Trek Into Darkness will also have the IMAX version of the film as well as two hours of special features.

The discs are expected to cost $48 when released, but are only available to preorder in Canada at the moment. Hopefully that will all change come 14th June.

The third Star Trek movie in the franchise Star Trek Beyond is set to be released on 22nd July 2016.

20th Century Fox, Sony Pictures and Lionsgate have already pledged their commitment to 4K Ultra HD Blu-ray releases, with some movies already on sale. However, Panasonic's DMP-UB900 is currently the only Ultra HD Blu-ray player available in the UK which can play them.