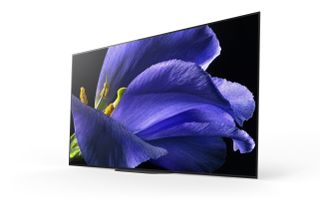 Both models will hit the shops in May, with the 77in set arriving in June. Pricing is yet to be announced for the 77in version. All three sizes are available to pre-order now.

The OLED set has over 8 million pixels, which are controlled by the Picture Processor X1 Ultimate processor. This detects and analyses individual objects and adjusts the contrast, detail and colour to make the most lifelike scene possible.

Also on board the Sony TV is the Pixel Contrast Booster, which brings more colour and contrast to bright parts of the picture. Sony claims these two technologies work in tandem to give picture quality approaching a professional-grade monitor.

The processor boosts HD and SD content to be closer to 4K HDR.

Other tech onboard includes Netflix Calibrated Mode, IMAX Enhanced, Dolby Vision and Dolby Atmos. Google Assistant is also built in, for hands-free operation, and the set is compatible with Apple's AirPlay 2 wireless technology.

Last week, Sony announced US pricing for its 98in Master TV Series, which is a snip at just shy of $70,000.