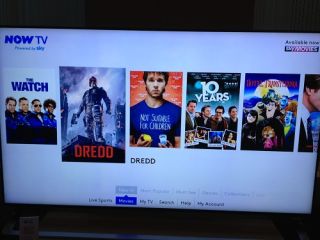 Now TV, Sky's app for pay-as-you-go Sky Sports and on-demand Sky Movies is making its way on to LG Smart TVs in an exclusive deal between LG and Sky.

The Now TV app has until now not been available directly on Smart TVs - confined to laptops/computers, PS3, Xbox 360, Roku streamers, YouView boxes, and Apple and Android devices - but LG has now snaffled the TV exclusive for 12 months.

This news was promptly followed by the launch of a Sky Now TV box for £10, which adds Sky Movies and Sports, BBC iPlayer, Spotify and more to any TV.

The Now TV app, however, will work on all 2012 and 2013 LG Smart TVs, and also comes to selected home cinema products, the BB5530A, BP630, BP730 and NB3730A. And anyone who buys a compatible new LG home entertainment product will get three months of free access to Now TV movies plus three passes for 24-hour Sky Sports.

Set for release in early August in time for the new Premier League football season, the Now TV app gives access to the complete Sky Sports and Sky Movies channels and content, without the need for a Sky contract or subscription.

You can pay for 24-hour access to all six sports channels for £9.99 or choose to pay a monthly subscription of £8.99 (for first 3 months, rising to £15/month) for access to the Sky Movies channels. Sky is currently offering a 30-day free trial for Now TV, too.

Much like Lovefilm or Netflix on a Smart TV, the Now TV app streams movies from the cloud. Content will be buffered and then delivered in the optimum streaming quality based on your home network.

A customised Smart TV card will be added to the LG TV interface for Now TV, offering tailored content based on your previous viewing habits and promising to prompt you for related content, such as the next time your footbal team is playing.

The app can also be navigated using the LG Magic Remote Control which uses point, motion, wheel and voice gesture to control the user interface.

Sky's 600-strong movie library, offering many films 12 months before the aforementioned streaming rivals, and most crucially, live sports, will be the big draw for Now TV.

Sky is promising up to four exclusive films every week which won't be available on any other streaming movie service for at least a year.

Gidon Katz, Director of NOW TV, comments: “We’re delighted to be partnering today with LG to give our customers another way to enjoy great blockbuster movies and the best live sport, including exclusive action from the Barclay’s Premier League, UEFA Champions League, Ashes Test cricket, US Open tennis, the 2013 Formula 1 season - all on their main TVs.”

Exclusive to LG for a minimum 12 months, we were told that development of the app, which looked slick and easy to use in our brief demos, would most likely mean it would be longer still before any other TV manufacturer offered the Now TV app.

Does contract-free, pay-as-you-go Sky sports and movies appeal to you? Would it impact on your choice of TV? Let us know in the comments below.