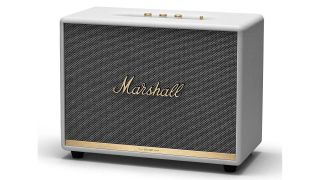 Holding out for a stonking Black Friday deal on a portable Bluetooth speaker? There's no need – Amazon has just slashed up to 60% off an abundance of impressive Ultimate Ears and Marshall speakers.

The best early Black Friday deals include a whopping 63% off the five star UE Megablast, 50% off it's five star sibling, the UE Boom 2, and a £40 saving on the UE Wonderboom.

Prefer some hard-rock heritage? You can also save £100 off the retro-styled Marshall Woburn II Bluetooth speaker, which is now £329. Bit rich for your blood? Grab £70 off the portable Marshall Stockwell II, which is now £150.

Ultimate Ears Megablast £99.99 at Amazon
Save £170 off this superb portable Bluetooth speaker, which earned a well-deserved five star What HiFi review. The megablast is a fun, energetic (yet controlled) performer, with Alexa voice controls built-in for good measure. It's available in a range of zingy colours, each priced at £99.99.

Marshall Woburn II Bluetooth Speaker £329 at Amazon
You can bag a cool £100 off Marshall's funky, guitar amp-inspired wireless speaker. Crank it up to 11 and you'll be rewarded with 110 watts courtesy of two tweeters and 5.25in mid/bass units apiece. There's also Bluetooth 5.0 and aptX technology to ensure high-quality streams. Available in black or white.
View Deal

UE Boom 2 Bluetooth speaker £59.99 at Amazon
This superb budget waterproof speaker is now half price. You get an awful lot for your money, including a durable design, great app functionality and 360-degree sound. With this 50% off, it's a steal.   View Deal

We're big fans of the rugged UE Megablast and Boom 2 portable speakers, both of which received full marks in their respective What Hi-Fi? reviews.

The feature-packed Megablast is durable, waterproof and boasts Alexa voice controls built-in. But we think it's real strength lies in its hugely enjoyable and mature performance. Our review that it was '£270 well spent'. Given that the price has dropped to a penny under £100, it's stellar value for money.

The Boom 2 might be smaller, but it's equally impressive, combining a waterproof  exterior with expressive, rhythmic sound. There’s a claimed 15-hour battery life plus a built-in mic to allow it to be used as a speakerphone. It's been succeeded by the Boom 3, but the Boom 2 is still a great bargain if you're looking for a fun and affordable portable speaker.

For something a bit more powerful, you could opt for the Marshall Woburn II, which has two 5.25in mid/bass units. Released last year, it features Bluetooth 5.0 and upgraded Digital Signal Processing that's said to improve its dynamic range.

Factor in the hefty savings and we reckon it's worth splashing the cash – the Amazon Black Friday deals won't last forever.