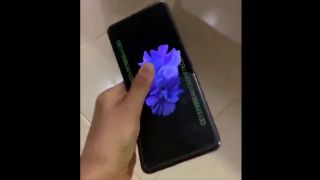 The first hands-on video of Samsung's second foldable phone has leaked. The video shows the Samsung Galaxy Z Flip being unfolded, then closed again and turned around, revealing the handset's entire form factor.

It was uploaded to Twitter by user Ben Geskin.

The Galaxy Z Flip is a clamshell phone, a form factor that was popular in the early 2000s. The video shows a small external screen for notifications, and a tall internal display that folds open.

It also reveals two rear cameras and a hole punch front-facer for selfies.

Rumours say that internal screen is 6.7in, which, when unfolded, would make it one of the larger phones currently available. The screen is thought to be glass instead of plastic, which should make it more hardwearing than its troublesome predecessor, the Samsung Galaxy Fold.

It's also thought to not have a headphone jack.

The handset could well be unveiled at Samsung Unpacked next Tuesday alongside the Galaxy S20 flagship phone and Galaxy Buds+ true wireless earbuds. It's also been rumoured to go on sale just three days later on 14th February. The perfect Valentine's gift, then? Be prepared to dig deep: t's expected to cost over £1000/$1000.

Samsung Galaxy Z Flip to go on sale next month