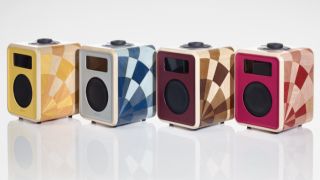 Ruark has collaborated with Linley, a luxury British furniture company, to create the rather jazzy-looking Tempo radio and Bluetooth speaker, which is set to go on sale in the UK for a hefty £1295.

Each of the deftly-named colours – ‘Submarine’ (yellow), ‘Monday’ (blue), ‘Norwegian’ (brown) and ‘Beret’ (raspberry) – features a marquetry inlay composed of four different veneers. The design is then completed by solid edges and a goatskin-clad front panel, which is embossed with the Linley logo.

Like many of Ruark’s radios, the Tempo features both  DAB/DAB+ and FM radio,  Bluetooth streaming, a 3.5mm output and input, a USB charging port, a brightness-adjustable OLED screen with RotoDial top-panel control, and dual alarms with several programmable settings.

But for all those similarities, it's at odds with many of the British brand's speakers when it comes to price: the Tempo radio will retail for £1295, roughly the price of a Linley vase.