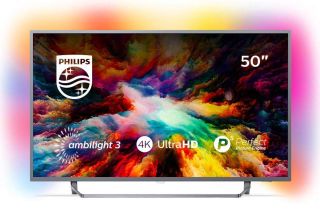 The spec looks remarkably similar to the Award-winning Philips 50PUS6703, which has been a long-time favourite of ours, with this model just offering a different stand design.

A 36% saving on this top-spec LCD/LED, Ambilight, Android 4K TV is not to be sniffed at. You'll get plenty of bang-for-your-buck.View Deal

You get all the smarts you'd expect from a modern TV: Ultra High Definition (UHD), three-sided Ambilight, Android TV operating system, HDR Plus (including HDR10 and HLG), and all covered by a two-year UK warranty.

Philips 55PUS7303 55in TV for £520 at Amazon
Same tech spec, but a 5in bigger screen and still a significant saving making it good value at just over £500View Deal

The set is powered by the Philips P5 Picture Perfect Engine and a Quad Core processor, while Micro Dimming Pro optimises the contrast of the image depending on the lighting levels in your room. Google Play apps are pre-installed. The only thing you don't get are ITV Hub, ALL 4 and My5 catch-up TV apps, if those matter to you.

There are plenty of connection options for your other kit, including 4 HDMI sockets (all HDCP 2.2) , two USBs, one component input, optical out, ethernet and wi-fi. Full HDMI-CEC EasyLink control is also part of the package.

We haven't tested this particular model, but if it's as good as its Award-winning sibling, the Philips 50PUS6703 - and the specs look very similar - then you're in for a treat.