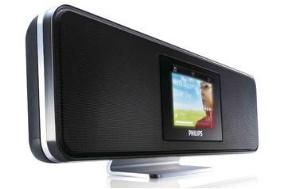 In mainland Europe it'll launch at 2400 Euros as a complete package, and 900 Euros for the receiver alone. Pricing and packaging details for the UK are yet to be set.

The HTR9900 package is being touted as the perfect partner for the 21:9 TV (that we previewed here and will have more on that tomorrow) and the BDP9100 Blu-ray player, which has the usual 1080p/24fps specification, as well as a 1GB internal memory for quick access to BD Live content.

Blu-ray's also coming to the SoundBar range, in the form of the HTS8160B. There are few details of this so far, but the mock-up certainly looked smart, and we've been assured it will have full support for HD audio. It will be officially announced at IFA.

Other interesting new SoundBar products include the HSB4383, which has a wireless subwoofer, and the HSB2313 which is a very slim-line unit that looks like a perfect compliment to a bedroom gaming setup – it doesn't have a disc-player, but it does have two HDMI inputs.

Portable Players
Next up is the GoGear range of portable players. The range kicks-off with the Spark, a small, square player with a 1.5in colour screen for displaying artwork and photos.

There are no buttons on the device; instead the screen is clickable and used to navigate menus. The 2 and 4GB versions of the Spark should be available now, with the 8GB model following shortly.

There's also an interesting, Bluetooth-toting device that looks rather like a tie-clip. According to Philips, most women keep their mobile phones in their handbags, and frequently miss calls when listening to their MP3 player.

This one, though, wirelessly connects to your mobile, allowing you to take calls through a built-in mic. The caller's name even appears on the device's small display. With 4GB of storage built-in, this looks like a handy little player.

The two video players are the Ariaz and Opus. The Ariaz has a 2in screen and up to 16GB of memory, while the Opus steps up to a 2.8in display and 32GB memory.

Both come with Philips' high-definition in-ear headphones, and are able to store and playback videos from YouTube and Google Video, thanks to some handily bundled PC software.

All of these GoGear players includes Philips' FullSound technology, which is designed to enhance compressed MP3s by effectively recreating the data that's been removed during the compression process. We're definitely looking forward to giving this tech a work-over.

Network Music Players
We've reviewed products from the Streamium series before, to varying success, but a couple of new additions to the range look like they may well hit the nail on the head.

The first is the NP2500, which effectively looks like a mini version of the existing WACS7500. The NP2500 has no speakers – instead it connects to your existing setup using optical or stereo RCA connections, and allows wirelessly accesses all of the music stored on your PC or NAS.

It's got decent format support, including uncompressed FLAC, and works using standard DNLA, so there's no need to install special software.

The NP2900 (pictured) is similarly dinky, but has built-in speakers, making it look like a useful player for the networked home's spacially-challenged second-roomed. Both players include FullSound, and are expected to retail at very affordable prices (expect £100-£150 for the NP2500).

Well, that's all for today, but stay tuned for a complete TV line-up, including more info on the 21:9 screen, tomorrow.