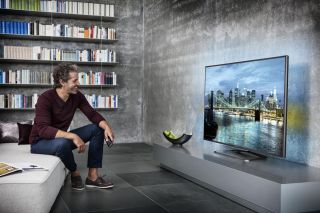 There was plenty of talk about Philips’ amazingly rich design and innovation heritage, but the brand is facing squarely forward – and the range of products it announced illustrates just how positive the company is.

The headline grabber is undoubtedly the Philips 65PFL9708 TV (above). A 4K design, available in 65 or 84 inch sizes, it’s ambilight-equipped (on three sides) and features Philips’ Ultra Resolution and Ultra Pixel HD Engine to deliver non-4K content with (it’s claimed) the same sharpness as native 4K content. The 65in version will sell for just shy of €5000. Exactly how much that translates to in sterling remains to be seen.

Equally intriguing (although not quite the technological tour de force of the 9000-series) is the 60in ‘Elevation’ TV (below).

Thanks to ambilight on all four sides (despite a depth of just 14mm), the Elevation really does appear to produce ‘a floating image in a halo of light’ (as CEO of TPVision Maarten de Vries described it).

Elsewhere, Philips intends to build on its current rich vein of headphones form with the Fidelio L2 (€280) and Fidelio M1 aptX Bluetooth (€250) headsets.

This is a tall-ish pair of two-way stereo speakers, one of which incorporates amplification, aptX Bluetooth streaming, CD drive, FM radio, USB socket and Lightning iPod/iPad dock. Yours for €800.

There are also two models in the new SoundStage range, which follows the current trend for soundbars big and strong enough to directly stand a TV on. If you only want the 2.1 channel stereo version, expect to pay €250. To incorporate a 3D Blu-ray drive and Smart TV features, that rises to €350.

It almost goes without saying that reviews of all these exciting new products will appear here and in What Hi-Fi? Sound and Vision just as soon as possible.