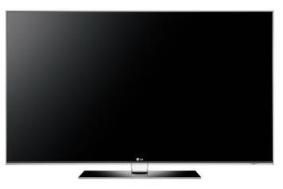 LG has a two-pronged attack: its passive 3D technology (which we demonstrated at the Bristol Show last month) is being rolled out across pubs in the UK and Ireland with the installation of commercial 47in LG LD920 TVs.

A tie-up with Sky 3D means viewers can watch live football, including Premier League matches, in the comfort of their local boozer. The Arsenal vs Manchester United match on January 31st was the first to get the 3D treatment.

Passive 3D glasses are provided as part of the scheme which is intended to pave the way for the launch of Sky's domestic 3D channel in April.

This will be followed in late spring by the launch of LG's new domestic 3D TV sets, which will use active shutter technology as favoured by rivals such as Samsung, Panasonic and Sony.

Both of the new TVs will have built-in Freeview HD tuners, as well as LG's NetCast web TV functionality, but the 3D glasses will be sold separately.

There are 960 LED lights in the 55in LX9900, and 864 LEDs in the 47in model. They're both DNLA- and Bluetooth-enabled, have TruMotion 400Hz image processing and include LG's Spot Control technology.

Stephen Gater, head of marketing for LG Home Entertainment, says: "We've seen such enormous interest and excitement from consumers around 3D TV that we chose to bring the LX9900 TVs to the shelves ahead of schedule, to meet the demand."

Full technical specs for the new 3D TVs and Blu-ray player are as follows:

For more on LG's forthcoming 2010 models, see our CES blog