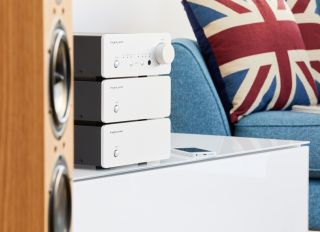 The range was launched at the start of this year with the XM3 phonostage and XM5 integrated amplifier.

Like the XM5, the XM7 offers a built-in moving magnet phono stage and DAC, meaning you can use it with both digital and vinyl set-ups.

The DAC has five inputs, plus a fixed-gain home theatre input and two headphone outputs. You can also bi-amp, thanks to the two pre-amp outputs.

Both the XM7 and the XM9 have a linear power supply with a large 200VA custom-made toroidal power transformer - this should make for cleaner sound quality compared with a switch-mode power supply.

They also only use high quality resistors and capacitors in the signal path, with Toshiba bipolar output transistors being chosen for their superior dynamic performance.

7 of the best stereo amplifiers