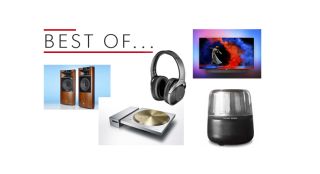 This week, Technics announced a new version of its classic SP-10R turntable, Sony unveiled the LF-S50G smart assistant speaker and Philips revealed two new TVs, one an OLED set and the other a quantum dot effort.

It's also new What Hi-Fi? week, as the October issue is now on sale. In it, you'll find reviews of Naim Uniti Atom and KEF LS50 Wireless system. There are also features on HDR 10 vs Dolby Vision and the best systems money can buy.

After reimagining its iconic SL-1200 turntable, Technics has gone even further back and announced a new version of its SP-10R turntable.

The Reference Class SP-10R features a coreless direct-drive motor and an ultra-low noise power supply. To further reduce noise and vibration, the power supply is separated from the platter.

READ MORE: Technics goes back to the future once more with SP-10R turntable

Sony has joined the smart speaker gang, with the launch of the LF-S50G wireless speaker.

It comes with Google Assistant built-in, but if you're tired of saying "Okay Google", you can use gesture controls instead.

The speaker emits sound via a 360-degree design and songs can be streamed via Bluetooth or wi-fi, with a 3.5mm aux for music players.

The quantum dot TV comes in 55 and 65in sizes and features HDR10, Android TV OS and Google Assistant voice control.

Samsung partners with Panasonic and 20th Century Fox for HDR10+

Onkyo announces two smart speakers – one with Alexa, one with Google Assistant

What Hi-Fi? Deals of the Month

Sony's MDR-1000X headphones from last year were fantastic, but Sony has decided to replace them with the WH-1000XM2s.

They are as good as, if not better than, the originals. Showcasing excellent sense of timing, plenty of detail and impressive noise-cancelling, our only issue is that the touchpad controls take a while to get used to.

Sony's competitors are going to have a tough time beating the 1000XM2s. They are a mighty pair of headphones.

The K2s are unmistakably huge, so you won't have any problems noticing them. They're also enormously expensive.

Put the price aside and you have a superb speaker that marries super-low frequency performance with great composure at high volumes.

It's kind to all types of music, and we have no complaint about the performance. But the size, price and looks may put some off what are a fantastic pair of speakers.