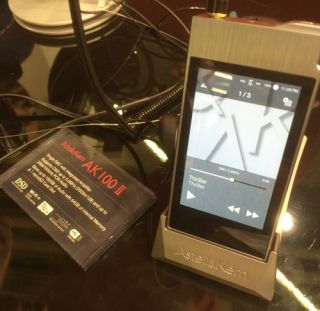 Astell & Kern have unveiled two new high-res music players at the Munich High End Show. The news follows on from the announcement that Qobuz are to launch a dedicated app for A&K's players, which will allow for direct high-res audio downloads.

The AK100 II, (not to be confused with the AK100 Mk II) and AK120 II (above) have been styled to match the company's flagship AK240, which was announced earlier this year at CES. They also use a similar Android-based interface.

The AK120 II adds a second Cirrus Logic DAC (so there's one each for left and right channels), and gets a boost in storage to 128GB. Pricing is yet to be announced, but both players are due to go on sale later this summer.