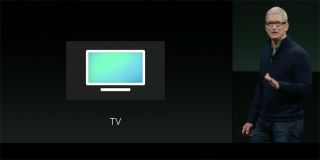 Apple announced fresh MacBook Pro laptops at an Apple Event today, with a touch sensitive Touch Bar above the keyboard stealing the headlines, but there was also time for an Apple TV update.

Tim Cook, Apple CEO, revealed the new 'TV' app, which will launch on the 4th-gen Apple TV box and across iOS devices. So that's two 'Apple TV' products, but still no actual TV...

The idea of Apple's new TV app is to bring all the available live and on-demand content on the Apple TV box into one easy to navigate app, while also affording you access to your TV shows and films on your iPhone or iPad.

The app will sync across devices meaning you can start watching a show on your mobile device precisely where you stopped watching on your Apple TV box, similar to the fluid viewing experience offered by the likes of Sky Q.

Video content from iTunes and compatible streaming apps will be pulled into the TV app, though it seems this won't include Netflix at launch, despite the app's presence on Apple TV. Neither will it include Amazon Prime Video, which is missing from the Apple TV experience altogether, as is the likes of BBC iPlayer and All 4 in the UK.

There's also an update to Siri on Apple TV, bringing new search commands for finding live content. "Which games are on right now?" is one command that should now be answerable by Siri and Apple TV.

Predictably, the Apple TV app will launch in the US first, with content partners including HBO, Hulu and CBS. It's due out by the end of the year. We wouldn't be holding our breath for a UK release any time soon, but as and when the TV app does arrive, let's hope Apple can fill some of those content gaps.