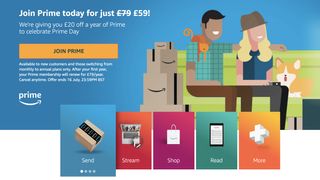 Amazon has reduced the price of a year’s Prime membership to just £59 in preparation for Prime Day 2019 next week.

The £20-off deal on an annual Prime subscription, which is usually £79 per year, is available now until midnight on Tuesday 16th July, when Prime Day officially ends.

While the vast majority of the deals will stay hidden until Amazon Prime Day itself, further benefits, which Amazon Prime members can enjoy throughout the entire year, include free streaming of thousands of movies and TV shows on Netflix-rivalling Prime Video, early access to Lightning Deals, plenty of free books and magazines on Prime Reading, plus next-day and same-day delivery on select items.

The highlight: free access to a number of Premier League fixtures for the upcoming 2019/2020 season.

The discount is available to new Amazon Prime customers, or any current Prime customer paying monthly if they switch to an annual payment.