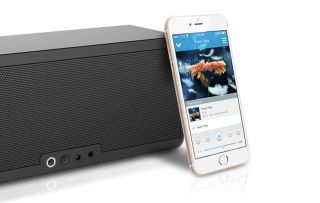 We first discovered Theatre Box late last year after the US company took to Kickstarter in order to fund the production of what it described as the "most compact wireless home theatre speaker".

Now, with that successful crowdfunding campaign behind it, Acemile has announced that its new Theatre Box is due to begin shipping next month [February] in four colours and at a cost of $299.

The main selling point of the Theatre Box is that it requires no wires or apps to operate – all you'll need to do is connect a Bluetooth device to start enjoying its 360-degree surround sound.

An auxiliary input is also provided if you want to use a wired connection, with Theatre Box said to be able to fill a 2,000sq ft room or entire apartment without needing any additional speakers.

It houses four 2in full range drivers and a 3in active bass driver, and it'll be able to automatically set up the "optimal listening experience" thanks to its dual core digital audio processing circuitry.

The company claims it then delivers layered sound waves in a "bubble" form, which immerses the listener as the sound "bubbles" reach the ear, meaning there is no one "sweet spot" when the speaker is used.

Renowned record producer Herbert Waltl said: "In terms of audio reproduction and incorporating sophisticated technology into an easy-to-use speaker, the Theatre Box is clearly a breakthrough."