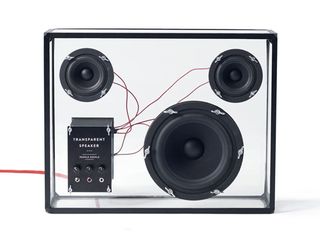 If you have the idea for a hot new hi-fi or home cinema product and the technical expertise to make it happen, the next step would be to get the funding in place to turn that concept into reality.

For individuals and smaller enterprises, getting that cash can be the stumbling block. But now, the growing crowdfunding trend means supporters can be recruited to help fund a project.

Kickstarter is the most prominent funding platform, and we've started to hear more about the exciting products it's helping to finance – like the Geek Out DAC seen at the Bristol Show 2014.

If you're not familiar with Kickstarter, it's a platform that lets you financially support the projects that take your fancy. You then pledge an amount of your choosing and select a reward tier.

However, you will not be charged until that project has reached its funding goal – or if it never reaches its funding goal. If the project succeeds, you'll be notified and you'll receive the reward you chose at the pledge stage.

And it works. We've also told you about the new Ferguson Hill Clear Speaker System being developed here in the UK and the Aurosonics Rockets – buds so comfortable you could sleep with them on, is the claim here.

But there are plenty of other intriguing audio and video products either funded or seeking funding through Kickstarter. Here are just some examples of the best new ideas and products we've come across. Seen any others? Let us know in the comments below.

One of the new products we've already told you about on whathifi.com is The Dash by Bragi. Munich-based Bragi has had amazing success in its quest to raise $260,000 towards the development of these new in-ear headphones.

More than a month before its March 31st funding deadline, the "world's first" wireless smart in-ear buds have attracted nearly $2.4 million worth of pledges from supporters throughout the world.

It is expected The Dash will go into full-scale production in November 2014, with the headphones set to boast 4GB flash storage, Bluetooth 4.0 connectivity and the ability to track biometric data.

American firm U-Turn Audio brought this all-analogue turntable to Kickstarter in the hope of securing $60,000 by 22nd January 2013. And by raising nearly $240,000, the campaign succeeded.

At the moment, the company says both the Orbit Basic Turntable ($179) and the Orbit Plus Turntable ($279) are due to ship in April 2014 but only in the US and Canada for the foreseeable future.

U-Turn Audio says the Orbit is designed to be a "remarkably simple turntable" that lets you experience high performance vinyl playback without having to meet "prohibitively expensive" costs of alternative kit.

Launched originally as auris: Bluetooth for your Dock, this wireless music receiver was funded back in 2012 and has since become reality. It connects via Bluetooth 4.0 to a wide range of devices.

As well as streaming music, it also comes with a built-in microphone to let you receive calls too and the auris website suggests that customers in the UK can buy the freeDa direct from the US.

It has been designed to turn any 30-pin music dock into a Bluetooth speaker, which will free up your iDevices or even make sure your docking system won't be left redundant if upgrading devices affects physical compatibility.

A small, sleek and affordable amplifier for vinyl lovers is how this product is described by Planet of Sound, which surpassed its Kickstarter target more than two weeks before its deadline.

The final production run is pencilled in for May 2014 and it is expected to cost CA$399. And if you're in the UK, Planet of Sound says it will ship outside Canada for an additional CA$32.

This product from Swedish design agency People People is pretty much what you'd expect from the name – a Transparent Speaker with high quality components and designed for "any space".

The speaker is priced at €700 and is expected to ship this month, with overseas delivery available. We've also spotted it available for pre-order from Selfridges for £599, with delivery expected in late June.

If your smartphone or other digital device has become where you store your music, how do you listen to it back? If you want to listen to your collection on a pair of speakers, this may be of interest.

The BluAmp – due to start shipping this summer – is a wireless amplifier that connects wirelessly to a Bluetooth-enabled device and can drive any speaker. After failing to secure funding at the first time of asking, it has now reached its target.

Funded in July 2012, The Pocket TV is described by Infinitec as a thumb-size micro-computer that will connect to your television using the HDMI port and convert it into an Android 4.0 smart TV.

The device lets you download apps from the Google Play Store to stream video, play games, surf the internet and more on your set. It is priced at $139 and can be delivered overseas from the US.

A recent success on Kickstarter, the Avegant Glyph uses a HDMI input to let you watch a wide range of content from portable, laptop, gaming and desktop devices to a headset wherever you are.

It features a Virtual Retinal Display that uses 1 million micromirrors in each eye piece, and a stereo audio connection. It is expected to cost $499, plus an estimated $50 for UK delivery.

One of the most successful projects we've seen on Kickstarter in terms of funding received compared with the original target is Virtuix's Omni, which lets you move freely in your favourite game.

Stand up and travel through virtual worlds using your feet with the help of patent pending technology thanks to Omni, which costs $499. UK delivery is estimated to cost an additional $100-$150.

One of the highest funded audio-visual projects on Kickstarter, the Oculus Rift is a virtual reality headset designed for video games and comes with a high resolution display.

At present, a development kit has been released for PC gamers and costs $300. However, there is no word on a consumer product launch nor a console-ready version of the Rift at present. That's not stopped the Rift attracting a lot of attention.

Not all Kickstarter campaigns are guaranteed to succeed – no matter how innovative and exciting the product might sound. Here are some that appear to have gone back to the drawing board.

Igbloo is a device that connects to a non-Bluetooth hi-fi and lets you stream your music from an iPod, tablet, smartphone, PC or any other Bluetooth-enabled device – all in high quality.

It appeared to have generated some healthy interest and was even set to include a Wolfson DAC, but the Kickstarter campaign was cancelled in November 2013.

This device came to Kickstarter described as a media hub for the home that would be able to stream local or internet media to and from a HD TV, tablet or smartphone via AirPlay or UPnP.

MediaBox would have let you stream video, music and photos in 1080p, accessing content from PC, MAC and many other devices. However, it fell a fair distance short of its £50,000 goal.

According to Objekt Inc, ORA was a sound system that would deliver "truly immersive" audio on your iPad and featured eight tuned, front-facing speakers surrounding the screen.

Your iPad would turn into a portable entertainment system at five times the sound volume of an iPad on its own. However, it seems not everyone is enamoured by the idea of louder iPad speakers and the project failed to raise the necessary funding.

Seen a better Kickstarter or other crowd-funded product? Let us know in the comments below.