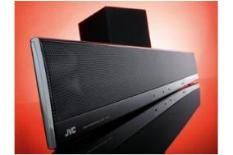 At least as far as the casual showroom browser's concerned, the JVC TH-BA1 doesn't really do itself any favours.

In a market that exists primarily because some customers don't want big, bulky speakers accompanying their nice slim TV, being the most cumbersome soundbar around isn't a wholehearted recommendation.

Further visual indignities come courtesy of the wireless subwoofer, which is a vinyl-covered confection of the most prosaic kind.

Trio of audio modes
Where specification is concerned, the TH-BA1 continues the ‘rather humdrum' theme.

Audio is input via one of two digital optical inputs or a 3.5mm analogue socket and delivered in one of three EQ modes, two of which strive to provide pseudo-surround sound.

There's a comprehensive little remote control handset and the option to dim the bright blue light on the soundbar's fascia.

That's about it – the subwoofer's wireless aspect is as exciting as the specification gets.

It's to the JVC's credit, then, that the sound the TH-BA1 makes is altogether the most likeable thing about it.

Smooth integration
Decoding the DTS soundtrack to preposterous Liam Neeson vehicle Taken, there's genuine width to the soundstage this soundbar generates: you'd never mistake its resolutely front-forward presentation as surround sound, but the JVC's more than capable of occupying the full width of your viewing room.

Integration between the speakers in the bar and the subwoofer is smooth enough too, and there's a resolute absence of hardness to the TH-BA1's sound, even at considerable volume.

The subwoofer could be more assertive, certainly (though its stance is preferable to the mindless bluster less-capable rivals serve up) but it modulates the low-frequency stuff quite well.

The second of the ‘surround' EQ settings provides an even wider soundstage, but introduces an air of vagueness and uncertainty into the middle of the stage where the majority of dialogue sits.

This is a trade-off too many as far as we're concerned; it's better to stick with the slightly smaller scale, but altogether more cohesive, of the presets.

Performance belies the looks
Given that we often receive products that over-promise visually and then underwhelm in action, it's nice to find a product that's far better realised, and far more enjoyable to listen to, than the looks, feel and
finish suggest it's going to be.

If you can get beyond the relatively hefty dimensions and bog-standard looks, the TH-BA1 is an unpretentious, honest product that sounds far better than your flatscreen TV ever will.