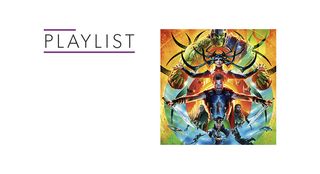 In Norse mythology, Ragnarok is the death and destruction of all things. In Marvel’s third Thor film, it’s more of a rebirth.

Ragnarok sees Thor stranded on the planet of Sakaar, his hammer Mjolnir destroyed and a new threat (in Cate Blanchett’s Hela, who eyes the Asgardian throne) emerging.

He has to find a way off Sakaar to stop Hela’s reign of terror and prevent the impending Ragnarok.

Ragnarok continues the MCU approach of mixing thrills with humour, the 17th film in this MCU making a bid to be the funniest yet. That's down in part to the tone established by Kiwi director Taika Waititi (What We Do in the Shadows, Hunt for the Wilderpeople) and a script that affords opportunities for offbeat characters and humour.

The plot follows two threads. One is the apocalyptic plot that involves Hela and Asgard. The other takes place on Sakaar, where Thor is captured by Tessa Thompson's Valkyrie and made to participate in gladiatorial battles by Jeff Goldblum's Grandmaster. It also happens to be where Mark Ruffalo's Bruce Banner/Hulk disappeared off to after the events in Age of Ultron.

The Sakaar storyline works best, cribbing from the comic's Planet Hulk storyline - Ragnarok is more fun when its sights are trained there. The setting, characters and action are much more engaging than the Ragnarok story.

That it underwhelms is because it's strangely isolated from the main story, causing the film to be lopsided. Asgard has never felt like a place with personality and, despite the filmmakers efforts (or lack of), it feels like an afterthought - which is a shame here, as it means Cate Blanchett's scenery-chewing Hela is sidelined for long stretches.

Blanchett grabs your attention whenever she's on screen, with Hela making a bid to be one of the more interesting foes in the MCU. However, she has to contend with much of the film's exposition, while the heroes get to have most of the fun.

Hemsworth has always been watchable, though this probably his most engaged and relaxed performance. Jeff Goldblum's Grandmaster is perfect casting, full of his trademarks 'ums' and 'aahs' and, despite a slightly wonky British accent, Tessa Thompson is very appealing as Valkyrie. The rest of the cast are entertaining, whether it's Hiddleston's Loki, Ruffalo's Banner/Hulk or Waititi's mo-capped performance as giant rock alien Korg.

Ragnarok, along with the recent Black Panther, is one of the MCU's best efforts - its humour, tone and absolute self-confidence leaves you grinning from ear to ear.

Ragnarok was shot with Alexa 65 cameras at 6.5K and received a digital intermediate at 2K. Like Guardians Vol.2 it's been shot at a higher fidelity but finds itself downscaled before being upscaled to 4K.

Ragnarok is colourful, similar to Guardians Vol.2 in its palette and tone if not its intensity. Ragnarok strikes an impressively naturalistic look for a fantasy film.

The film appears to have received a subtle HDR10 grading, one that chooses its moments to embellish aspects of the image but doesn't drastically overstate the film's look.

This image looks firmer and a bit darker than the HD Blu-ray. Darker colours have a little more solidity and depth to them, while lighter colours feel a touch more refined and expressive. Blacks are deeper and help create a bolder image, such as when Thor fights Hulk in the gladiatorial battle.

It's another 4K disc where lumunosity gets a boost – notice the red lights on guns held by the Grandmaster's guards late on, or the electric blue of Thor's lightning. Texture and detail receive a upgrade too - the gold cloak the Grandmaster wears pops and shimmers more obviously on 4K and the intricate patterns are more easily found. Some CG looks a little more noticeable, but it's rare you'll notice any glaring moments.

Complexions are varied and expressive - we like the contrast between Thor's ruddy look and Loki's pale demeanour - and even the Hulk's green skin has an impressive solidity to it. You can make out the details on rock alien Korg better, his facial expressions are more evident.

Shot digitally Ragnarok has a clean, pristine look and it's one we enjoy. It's not the type of image that grabs you like Murder on the Orient Express, but its painterly, naturalistic look is subtly impressive.

The similarities with Guardians Vol.2 don't stop with the visuals, with the Atmos track adopting a similar approach.

The front speakers are where much of the action is focused, with the surrounds offering assistance when it comes to objects panning across the soundstage. Otherwise the Atmos speakers add extra verticality to the track.

And we like the use of Atmos here more than in Guardians. Whether it's specific objects (like the piece of junk that almost flattens Thor near the beginning), Mark Mothersbaugh's 80s-infused electronics score or a crowd baying for the introduction of the Hulk in a gladiatorial arena, the height channels are expansive, well articulated and clear.

You could apply that observation to the rest of the track. No matter how noisy it gets, sounds are rendered clearly - the direction and placement of objects are easily discernible.

The action packs a punch, quite literally in the case of the gladiatorial fight between Hulk and Thor (where punches are beefily rendered with weight and volume). The LFE channels are clearly defined, producing a room-shaking rumble when engaged.

There's a noticeable rise in intensity as the film reaches its climax, culminating in an almighty thunder strike from Thor and a rendition of Led Zeppellin's Immigrant Song. Once it gets going, Ragnarok is thunderously great fun.

MORE: Dolby Atmos – what is it? How can you get it?

Out of Marvel’s big hitters, Thor was the one who didn’t quite fit.

The first Thor was fun, the second suffered from an underwhelming storyline, and the character’s appearances in the Avengers' films haven’t best utilised Chris Hemsworth’s charisma and presence. Ragnarok rectifies that by giving him the platform on which to shine.

It's slightly unbalanced, but with a tone that's enjoyably daffy, Ragnarok is at its best when it does things with a sense of humour. The upscaled picture is a refined and subtly impressive effort, accompanied with a clear and engaging Atmos soundtrack.

Guardians Vol.2 was an impressive first foray into 4K UHD and Thor: Ragnarok continues that impressive run of form.