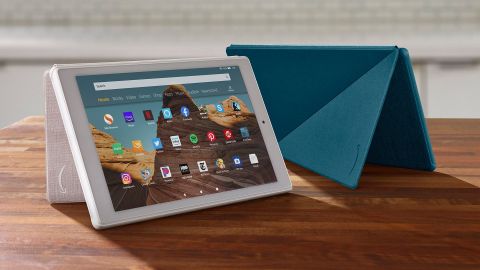 Improving on a What Hi-Fi? Award-winner is always likely to be a challenging task for a manufacturer, especially when the improvements have to be made without incurring an increase in price.

So, is the 2019 edition of the Amazon Fire HD 10 a worthy upgrade on its predecessor? And, more importantly, is it still the best budget tablet you can buy?

Under the hood, quite a bit has changed. New for 2019 is an octa-core 2GHz processor – an upgrade on the 2017 quad-core 1.8GHz. There’s a 2MP front-facing camera to match the one on the rear (a step up from the front snapper in the 2017 Fire HD 10), charging is now via USB-C rather than micro-USB, and the microSD card slot now supports cards up to 512GB rather than 256GB.

Battery life Up to 12 hours

Aside from the 30 per cent faster processing promised by that octa-core, the USB-C port is perhaps the most significant of these upgrades. It means a full charge from flat now takes three hours instead of four – but only if you use a 15W adapter which, disappointingly, doesn't come in the box. Use the bundled charger and it still takes four hours.  The USB-C connection also increases the speed of data transfer.

Battery life is now a claimed 12 hours, up from the ten hours of its predecessor. There’s Bluetooth 4.2 rather than 4.1 onboard, and it’s a whole 4g heavier – hardly a back-breaking increase. Otherwise, dimensions, RAM, speaker configuration and screen size remain the same, with built-in storage options sticking at 32GB or 64GB.

The Fire HD 10 is available in several different colours, namely ‘plum’, ‘twilight blue’ and white. Our dusky pinkish plum model has lost the Amazon brand name on the back, leaving just the curved-tick smile logo – and it makes for a more premium look. The decidedly unyielding plastic is the same, but this is an entry-level tablet, after all.

The power button, charging port, 3.5mm headphone jack and volume buttons are all located on the top edge of this comparatively large 10.1in tablet when held in portrait position, so our usability issues with the volume persist. It feels counter-intuitive to alter volume on the horizontal rather than vertical – and the buttons are too far from the natural position of our hands when holding it to make adjustments stress-free. That is a minor gripe at this price-point though.

The HD 10 fires up with greater speed than its predecessor and the OS skin has been tweaked pleasingly. It’s slightly less busy, with text smaller and closer to the edge of the screen. It looks altogether cleaner and calmer – and less like a perpetual advert for Amazon products and services.

That said, as with previous iterations, you’re still dragged into the Amazon ecosystem. Amazon Music, Kindle books, Amazon Prime Video and Audible content are all placed centre-stage. And if you want Google Maps, Gmail, Google Play, YouTube or Chrome, for example, you're simply out of luck.

What really sets the Amazon Fire HD 10 apart at this price is Alexa compatibility, which allows you immediate access to Amazon’s voice assistant and grants the ability to control Alexa-enabled devices from your tablet. Alexa responds well to our requests, though there is a predictable bias towards Amazon’s streaming services.

The front camera has been vastly improved, and using the front or rear snapper in HDR mode no longer means holding the tablet perfectly still to avoid blurry images. The 720p video hasn’t been levelled up to 1080p (found in Apple's latest iPad Mini), which might be a sticking point for those who like to video call – although at this level, that seems an acceptable compromise.

We download RuPaul’s Drag Race UK from BBC iPlayer and the colours are bright, tonally accurate and vibrant, while blacks are inky, dark and detailed. The screen’s 16:10 aspect ratio in landscape mode is remarkably easy to get used to, particularly if you’re accustomed to Apple tablets.

There’s a modicum of noise and shimmer as contestants take to the runway during the lip-sync battle and we become aware of the Fire HD 10’s ability during motion scenes. It’s not the cleanest picture we’ve seen in a tablet, but it’s nothing short of a solid, enjoyable performance for the money.

Sampling the HD 10’s picture upscaling ability, we type ‘YouTube’ into the search bar (no app, remember) and cue up some Champions League action from BT Sport. A fast-paced game of football ranks among the more challenging of clips, and the Fire HD 10 struggles to deliver in Full HD, presenting the action with occasional softness and blur. The post-match interviews are clearer, but it’s a mixed bag. However, the HD 10 isn’t the only entry-level tablet to struggle in this respect.

The HD 10’s ‘Dolby Atmos’ integrated dual stereo speakers are somewhat optimistically branded. While the drivers are well spaced along the left edge of the tablet and provide an open sound, they’re lightweight and prone to edginess. However, the whole idea of getting an immersive overhead sound from a tablet is rather far-fetched and, though we’d love to be proven wrong, we aren’t here.

We download some 24-bit/96kHz FLAC files to the HD 10: Aretha Franklin’s Respect, Gladiator Rhapsody (from the movie Gladiator) by Lang Lang/Hanz Zimmer, and Bjork and Una Sveinbjarnadottir’s Lionsong. Once we locate the files in My Music – via several Amazon Music redirections – we play them though the current Award-winning AKG Y50 wired headphones.

Lang Lang’s keys in Hans Zimmerman’s composition are tonally convincing and emotive, with plenty of detail across the frequencies and a pleasing, realistic musical build.

Franklin’s epic vocal is central, with backing vocals in our right ear and the bass guitar in our left. It’s an expansive presentation with each instrument given room to make an impact. While there’s a minor shortfall in bass depth, there’s still enough weight to keep things soulful.

Bjork’s vocal is slightly over-emphasised and tends towards harshness in the midrange – but this only serves to highlight out the HD 10’s attention to detail when delivering the track as the artist intended.

We stream a Q-Tip playlist on Spotify. Vivrant Thing comes through with energy and there’s a good depth and rawness to the head-nodding guitar riff. Playing Breathe And Stop, the HD 10 continues to time well, capturing the grimy, 1999 reverb that typifies the track.

For £150, the wise money is still on the Amazon Fire HD 10 (2019). At this price, compromises are inevitable but, provided you’re well-versed in Amazon’s ecosphere, there’s so much to enjoy here. It’s snappier, better-equipped and, to top it off, looks that bit classier than the device it replaces.

It can’t compete with the Apple iPad Mini, but at less than half the price, it doesn't have to. The Amazon Fire HD 10 is an excellent budget tablet, and you could do far worse, even if you were to spend a lot more.