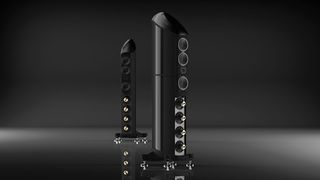 The Eminence introduces a number of new developments, in everything from tweeter to cabinet.

Fibonacci, the latest version of Wilson Benesch’s tweeter technology, builds on the Semisphere design (a hybrid dome based on carbon fibre) the brand introduced in 2012.

Its faceplate is formed from a carbon fibre composite structure and, along with the motor, is decoupled from the rest of the tweeter chassis - which Wilson Benesch claims achieves a flat frequency response, wide dispersion and low distortion levels.

Naturally, it’s been optimised to work with the new 17cm Tactic 3.0 mid/bass drivers, which feature polypropylene cones for its stiffening and damping qualities. As with the brand’s previous range-topping models, the midrange driver remains crossover-free.

It’s all housed within “the most advanced Wilson Benesch enclosure ever built” - and perhaps the most elaborately named too. The A.C.T. 3ZERO Monocoque enclosure is made from a new proprietary core material that increases the stiffness-to-damping ratio of the cabinet by 30%.

Steel ties work to compress the vertical structures to reduce resonance, too.

The largest sub-component used for the Eminence apparently requires 250,000 lines of CNC code and 16 hours of machining, reducing a 100kg solid billet of aluminium by more than half to create a single 38kg plinth.

(The total weight of each speaker is a back-breaking 145kg.)

The Eminence will be available later this year for a considerable (although not-surprising) £140,000 per pair. Visitors to the Munich High End Show will have the first opportunity to see them next week.

The best 30 speakers of What Hi-Fi?'s lifetime