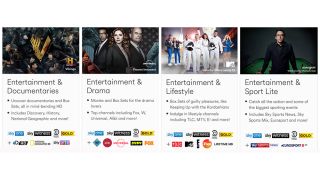 Each includes Sky One, Sky Witness, Gold HD and Comedy Central HD (all currently not included in the Player bundle), plus channels relating to each of the genres (see below) and a range of on-demand box sets.

The VIVID 500 broadband, which is only available as part of Virgins V.VIP bundle, is supposedly seven times faster than speeds offered by BT and Sky, and capable of downloading a 4K film (average size 20GB) in under six minutes.