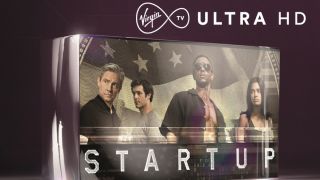 Historically, Virgin has remained somewhat quietly in the shadows of BT and Sky when it comes to 4K content offerings.

While Virgin did offer this summer’s Champions League football and Wimbledon tennis finals in Ultra HD, its media rivals have been broadcasting the higher resolution for a few years now. BT has its Sport Ultra HD channel while Sky hosts several sports, dramas and movies on its Sky Q platform.

But it looks like Virgin is finally getting serious about 4K. Next Monday (17th September), Virgin will premiere its dedicated 4K Ultra HD entertainment channel, which will be available for Virgin TV Full House and VIP customers with a V6 set-top box.

At launch, the channel’s schedule features several dramas distributed by Sony Pictures, including Start Up (Mondays 10pm), Masters of Sex (Fridays 10pm), Shut Eye (Tuesdays 10pm) and The Art of More (Thursdays 10pm) - the latter two of which will be airing in the UK for the first time.

The channel will also broadcast nature documentaries, plus gigs from the Rolling Stones, Sting and Imagine Dragons.

Comedian, author and Love Island narrator Iain Stirling will become the ‘voice’ of Virgin TV Ultra HD for its opening night next Monday.

As Virgin TV customers have had the choice to add the BT Sport Ultra HD channel to their TV package since July, subscribers of Virgin’s higher-tier bundles will, as of next week, suddenly have a well-rounded 4K offering open to them.

BBC 4K HDR iPlayer: after the World Cup and Wimbledon, where next?