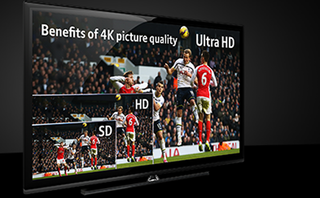 Until recently, Virgin TV’s 4K offering has been unimpressive compared to rivals Sky and BT.

But in the past few months, it’s been able to offer top tier customers Ultra HD coverage of Roland Garros tennis (via Eurosport’s 4K channel), the 2018 World Cup (via the BBC’s 4K iPlayer trials), and the Champions League final thanks to a partnership with BT.

Today’s announcement that Virgin and BT’s partnership has been extended in a multi-year agreement spells good news for sport fanatics who own a 4K TV, Virgin TV V6 box and subscribe to Virgin TV’s Full House or VIP bundles - it will see them automatically gain the BT Sport 4K UHD channel (531), at no extra cost, from 30th July.

New and existing Virgin TV customers signed up to its Player or Mix bundles will be able to add all BT Sport channels, including the 4K one, to their package for £18 per month.

BT Sport’s coverage includes UEFA Champions League, Europa League and Premier League matches, the FA Cup, European Rugby Champions Cup and MotoGP - some of which will be offered in 4K.

While the agreement all but confirms Virgin isn’t looking to offer its own rival Ultra HD sport channel anytime soon, it’s great to see Virgin finally stepping up in the 4K broadcast game.