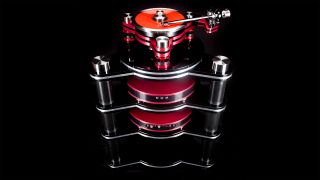 If you appreciate a beautiful turntable (let's face it, who doesn't?), just feast your eyes on the new Vanquish from US brand VPI Industries.

Finished in ruby red and mounted on a dedicated, heavyweight stand, the Vanquish is a truly eye-catching sight, but the design is about more than attracting attention and is based on an earlier bespoke model created by VPI founder Harry Weisfeld.

The turntable utilises magnetic direct drive technology – a further development of the direct drive system seen in the VPI HW-40 – and the company's reference tripod shape. Lucky owners can mount up to three tonearms of any length, type or brand, with VPI believing that tonearms are a very personal choice for listeners.

The included tonearm is the VPI Fatboy (with either a Uni or Gimbal bearing), the company's first 14-inch, 3D-printed tonearm. This design aims to deliver both rigidity and low resonance.

The tonearm also boasts hidden, internal Nordost wiring that not only reduces visual clutter but also runs directly to the phono stage to reduce the number of connections between cartridge and amplification.

On the subject of the phono stage, it's a bespoke unit based on VPI's existing Voyager Phono that visually matches the turntable and sits on a lower level of the stand.

Between the two in the main picture is a separate unit that supplies power and provides motor controls. By locating these away from the turntable itself, VPI says it's provided "additional shielding and noise reduction from an already dead quiet unit".

Originally announced for the US during Captial Audiofest last November, the Vanquish's European launch was set for the now-cancelled High End Munich show. It is, though, available to buy in the UK now, with Renaissance Audio taking orders from anyone lucky enough to have deep enough pockets

Touraj Moghaddam: the man behind Roksan and Vertere talks turntables and cables

10 of the best British record players of all time