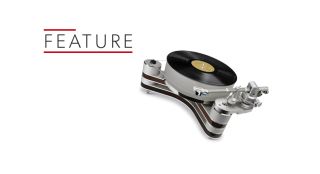 It would be difficult to call yourself a real audiophile without being an admirer of the qualities of vinyl and, as the newly expanded 'Turntables' section of our Awards indicates, more and more people are joining the ranks.

But what good is loving vinyl without a having a decent turntable to play it on? And while we've been diligently tracking the best turntables you can currently buy - no matter if you're on a budget or USB-compatible - we like to take a trip down memory lane as much as anyone.

So with the likes of Linn, Audio Technica, VPI, Pro-Ject, Michell and Systemdek making an appearance, these are the very best turntables we've heard since the first issue of What Hi-Fi? was published 42 years ago.

Linn's LP12 turntable was first introduced in 1972 and immediately proved popular with audiophiles. The range of compatible arms and cartridges the company made meant keeping this vinyl player up-to-date was satisfyingly easy.

Almost every aspect of the design has been revised over the years, and while the early breed of the LP12s had a round and rich balance, modern incarnations have moved towards a more neutral, even-handed sound.

Perennially the DJ's favourite, the SL1200 is known for being built to a supremely high standard. There was plenty of flexibility when it came to positioning and cartridge-matching too, so you had a fair bit of choice in making this turntable feel (and sound) like your own.

Tough, fuss-free, with solid sound quality - this player is worthy of its legendary status.

Since its introduction in 1978, the Rega Planar 3 has been a go-to turntable (and its modern incarnation is still going strong).

A respectable mid-market record player, the Planar 3 remains an easy-going, low-cost piece of kit that continues to keep our vinyl spinning - and since the company keeps refining the product, we imagine it'll stay that way for a while yet.

Who says that you can't get good quality on a budget? Not us, that's for sure. And it was as true in the '80s as it is now, thanks to Dual's CS505 player. It was a tidy, well-balanced performer that managed to bring a decent amount of detail to the table without exposing the entry-level kit it usually worked with.

While it might have looked a little inelegant in the beginning, later versions looked more refined thanks to smarter wooden plinths. But no matter how it looked, this Dual delivered satisfying results.

In 1982 the Gyrodec was a combination of great sound quality and artistic design. Bring the clock up to date and this player is still available - and it's a testament to its quality that it's essentially the same machine.

When it's up and running it sounds detailed, expressive and graceful, ready to put down other products costing plenty more. It's not plug-and-play - some assembly is required - but the instructions are clear, and there's a logic to its design that means it'll be spinning your discs in no time.

MORE: 21 of our favourite turntable cameos in films and TV shows

The Systemdek IIX became our Product of the Year in 1990, and it held that position for the next two years. Its sound quality rose well above that of its closest rivals - timing was confident, and music sounded tuneful and easy-flowing.

The first time we heard this turntable, we awarded it a dismal two stars. We were unable to get vinyl turning steadily at 33rpm - which, we're sure you'll agree, is a bit of a disadvantage when it comes to playing LPs.

But Pink Triangle brought the deck back to us with all problems solved - and we were thrilled to hear the Tarantella's open sound and refreshingly clear dynamics.

Although the Pink Triangle company closed in 2003, there's no doubt the London manufacturer's legacy lives on.

Despite its name, the Debut isn't the first product to come from Pro-Ject - but it's certainly one of its most significant. It's simple to use and great value for money, partly because of its European construction - the turntable was designed in Austria before being manufactured in Slovakia and the Czech Republic.

20 years of steady improvements brings you the impressive Debut Carbon, but it's with this original that Pro-Ject came to the fore.

When we first reviewed the Sovereign turntable, we said the first slab of vinyl to hit the deck had us "giggling like helium-addled hyenas". We've calmed ourselves a little since, but our enthusiasm hasn't dimmed.

This vinyl player has effortless composure and gives tremendous insight into the emotion in a record's original recording, revealing little details we hadn't noticed even in some of our personal favourites.

Vinyl junkies will always insist the black stuff sounds better than CD (or streaming), and this turntable will go a long way to proving that point.

You should never judge a book by its cover, and the same can be said for turntables. The Roksan Xerxes 20 looks to be your conventional, run-of-the-mill wooden-box turntable, but it is packed with clever engineering.

A motor that turns on its axis to compensate for torque fluctuations, a bearing designed to minimise noise and rubber suspension tuned to dampen specific frequencies are just some of the little tricks Roksan's engineers built into this player.

And they worked, winning our Temptations tournament at the time. The Xerxes 20 got all the essentials right - this is a player with first-class dynamics, and exceptional timing and rhythm.

20 years after the original Thorens TD160 turntable came through our doors, the TD160HD made its way to us in 2008.

While it might appear chunky, this turntable's performance is anything but. It treats the subtleties in a song well, ensures the vocals are full of life, and gives a sound full of bass and depth - yet you'll be surprised at how tight your vinyl sounds. Ultimately it's a faultless, five-star performance.

One of our reference pieces of kit for several years - and with good reason - this £12,900 turntable sounds as good today as when we first heard it.

Innovation by name, innovative by nature: the ceramic magnetic main bearing minimises friction and noise, its high-quality DC motor and electronic speed governor switches between 33.3 to 45 or 78rpm at the push of a button.

As audiophiles, we always hope for transparency in our music, and the Innovation delivers. It's built superbly and a joy to use - a compulsory feature of this list.

A uniquely designed turntable, Kuzma's Stabi S is a minimalist, beautifully engineered piece of kit. Its unipivot design, silicone damping system and two-piece counterweight on its arm - to name but a few design choices - all help it deliver top-notch sound quality.

Insightful, dynamic and natural-sounding, able to deliver vocals with real passion: this turntable is something special.

VPI Industries has a long history of producing great turntables, and 2015's Prime player is no exception. The MDF chassis, steel plate and simple-to-use design all help towards its splendid sound quality.

It's a wonderfully confident-sounding product, with plenty of punch and impressive dynamics on scales both small and large. Of all the products VPI has made since its 1978 founding, the Prime is one of the very best.

As an Award-winner, and one of our favourite turntables, you can be sure the LP5 has something special to it - in both design and sound quality.

Its J-shaped tone arm harks back to those used by Audio Technica in the 1960s and 70s, while the AT95EX cartridge is exclusively designed for this turntable. And it's sound quality makes it shine: it's rhythmic and dynamic, with more than enough detail to keep us satisfied.

A turntable you can plug straight into your amp, with the added bonus of USB output - the LP5 is a winner.

The best 12 TVs of What Hi-Fi?'s lifetime

The top 40 products of What Hi-Fi?'s lifetime