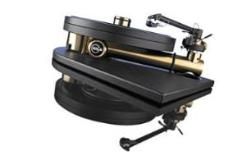 Kuzma’s entry-level deck isn’t cheap, but it is good. It’s a worthy alternative to Michell’s Orbe

‘Less is more' is a philosophy turntable specialist Kuzma clearly believes in.

Glance at the Slovenian company's entry-level turntable/arm combination and it's easy to get the impression something is missing, such is the focus on simplicity.

Take a closer look, and it's the quality of engineering that hits hardest.

This combo really is beautifully constructed. The Stabi S turntable (the name is short for stability) is essentially made up of two 50mm diameter brass bars arranged in a ‘T' shape.

The longer of these bars includes the arm base and main platter bearing. The whole assembly sits on three rubber ‘O' rings, which provide a small degree of isolation from the supporting surface, but mostly stop the turntable from sliding around.

The motor unit sits close to, but doesn't touch, the top of the brass ‘T', and drives the sub platter via a flat, ground rubber belt.

In material terms this upgrade looks poor value; however, we're convinced by the sonic benefits.

We doubt whether anyone would stick with the standard player once they've heard the improvements brought about by this change.

They include greater sonic stability and authority, along with stronger dynamics – not bad considering all that's been added is a second layer to the platter.

UK-specified Stabi S turntables come with a nicely finished brass record clamp as standard, and a dust cover. Also included is a high-density plywood board for the whole assembly to sit on.

Partnering arm impresses
The Stogi S arm – Stogi is short for rigidity in Slovenian – is hardly a run-of-the-mill product, either.

It's a unipivot design with a silicone damping system to control arm resonances, and a one-piece cable running unbroken from cartridge to phono stage.

The arm also has a neat two-piece counterweight arrangement that allows for both subtle weight changes and adjusts vertical alignment – essential with a unipivot design.

We used a variety of cartridges during the test, ranging from fine-performing moving magnets such as Goldring's 2400, through to high-end designs such as van den Hul's The Frog.

Pleasingly, there were no issues with any of the cartridges – the Stabi S/Stogi S just gets on with the job regardless.

This turntable/arm combination prefers to step out of the limelight, allowing the listener to ignore the mechanics of hi-fi production and concentrate instead on the important stuff – the music.

Unforced, natural sonics
There's plenty of insight, and the ability to keep instrumental strands in order, even when asked to deal with Carl Orff's Carmina Burana at its most demanding.

But what we like best is the natural way this record player delivers sound: dynamics swell in an unforced manner and there's just a hint of richness to the presentation that brings every single note to life without straying into anything like overt warmth.

The deck's decent timing makes sure the track retains a sense of momentum, something that's all too easily lost by less-capable designs.

The important point is that it will deliver only what's on the record – and not add any seasoning of its own. In the end that's what makes this Kuzma record player such a thoroughly likeable performer.

It's not perfect though. There are operational issues, such as the awkward speed-changing arrangement when you want to switch from albums to singles (the platter has to be removed and a sleeve added to the motor pulley).

And the lack of suspension means that positioning and the equipment support are even more critical than they are for a suspended rival.

Despite all that, and acknowledging the quality of rivals from the likes of Clearaudio, Michell and Roksan, the Stabi S/Stogi S remains an extremely tempting proposition.

Give it a listen – we doubt you'll be disappointed.