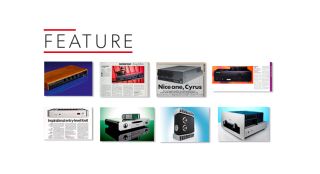 We've often referred to a stereo amplifier as the heart of a hi-fi system, the rug that knits a system together.

Considering its importance, it pays to pick a good one. A less than adequate performer could bring a system's potential down by a couple of notches.

This list of the best stereo amplifiers of What Hi-Fi?'s lifetime are the power providers that have helped to get the most out of a set-up and left us tapping our toes with joy.

Big or small, budget or high-end, functional or stylish, these amplifiers have left an indelible impression.

The 3020 amplifier put the NAD brand on the map, such was the impact it had. A power output of 20W per channel wouldn't have turned many heads, but the 3020 could drive speakers better than pretty much any of its rivals.

It had a balance that was smooth and full-bodied, which worked well with the less than refined budget kit of the time, delivering a good, coherent sound.

Arcam got off to a flier with its first product, the A60. It was a well-equipped amp, with a decent array of line-level inputs and a capable moving-magnet phono stage, and we were very much taken by its sound quality back in 1979.

To this day, it's still able to showcase the smooth presentation and expressive midrange that made it such a fun and entertaining listen. And that wood finish was, indeed still is, rather lovely.

Audiolab's 8000A caused a stir thanks to its "superb finish and styling", although today it looks like a grey tinged box with lots of dials.

Still, distinctive looks aside, it offered excellent sound and features including bass and treble controls, a stereo balance control and a separate record selector, so you could "listen to one source while taping another".

The sound was smooth with "plenty of presence and detail". Add its fine build and features and the 8000A was great value for money.

The Mission Cyrus One – back when Cyrus was a part of Mission – was very much a product for audiophiles, despite its budget price. It had no tone or balance controls and carried plenty of inputs for sources.

The One communicated a precise soundstage, but it was also capable at handling low-level details that other amplifiers "repressed or simply rendered messy". Combine that sound with a superb build quality, and you had an amp whose performance could rival pricier options.

This Naim came in three parts, with the 32 pre-amp, its accompanying power supply and the now legendary 250 stereo power amplifier.

It was a popular combination that made up many hi-fi users' systems, and was capable of delivering drive, dynamic punch and powers of organisation that few could match.

It was an impressive combination and the 250 has proved to be so popular that it's received several makeovers since, getting better with each iteration.

Pioneer's A400 was so good that subsequent models never really recaptured its essence. With the A400 apt at producing excellent detail, agility and dynamics, it left rivals scratching their heads as their own attempts to match the Pioneer left them floundering.

Even flanked by high-end sources and speakers, the A400 rose to the occasion. There weren't many budget components with such ability.

Marantz's PM-66 KI-S was based on the PM-66SE, but substantial reworking of its chassis and the use of improved components took it above the PM-66SE.

It was a well-equipped affair, including the presence of an improved moving magnet phono stage that made it more appealing for vinyl fans. The sound had a "clear and dramatic" balance, with instruments and voices having a striking presence in the soundstage.

There may have been amplifiers that sounded as good, but none had the mix of sound and features at such a competitive price.

What the Lavardin IT lacked in features, it made up for with an absolutely belting performance. Rarely had we come across an amplifier that sounded as clean and natural as the Lavardin.

It had a sense of clarity, detail and insight without ever coming across as sterile, edgy or harsh. It was so talented that it gave far more expensive amps a run for their money.

The A85 was different from its forebears. Where previous Arcam efforts veered towards warm and safe, the A85 had the ferocity of a sledgehammer smashing through glass.

It worked well with all genres of music, with no trace of boom or bloom, and a clarity that extended throughout the frequency range. We noted its "immaculately clean" midrange that had a resolution its rivals couldn't match.

The A85 was a sonic leader in its class, a fully featured amp that blew away the competition.

In terms of build, finish and feel, the A30 was very impressive. It had no trouble driving difficult speaker loads to high volumes, making it a good fit for any system. Its even-handed presentation highlighted the quality of its partnering kit, rather than turning the spotlight on itself.

Newer, tougher competition eventually ousted the Primare, but its sound and superb build meant it remained an excellent choice.

Krell's KAV-400xi was described as an entry-level amplifier, though its £2700 price might cause some to rethink the definition of that term. From its tasteful finish to the masses of power it delivered, this was an accomplished amp that could work well in a wide range of systems.

And, despite the punch and power it boasted, it was plenty musical too, delivering a smooth and refined sound, especially with its warm midrange. This was an amp that oozed quality.

The Caspian amp had been around the block a few times, as Roksan improved the design and performance. The fruit of that labour was the Caspian M2. With a revised circuit layout and upgraded components, it had a bigger, more powerful presentation than before.

It had a sense of authority, along with a dynamic sound that was full of detail, finesse and a rich tonality making for an immensely capable effort. The build and finish were excellent, it was easy to partner with and, while its distinctive look caused some consternation, there was no doubting its status as an exceptional performer.

Once winched into position, the Class A SE had a neat trick up its sleeves. The output was a puny 50W into 8 ohms, but that hid the fact that power output doubled as impedance halved, all the way to 200W into 2 ohms.

This was an amp that exerted control over its partnered speaker, offering power but handling it with subtlety, refinement and fluidity. Musically it could do just about anything. A superb amp, then - as long as you didn't have to lift it.

Pathos' products displayed over-the-top aesthetics, none more so than the InpolRemix. It was a small, beautifully made integrated amp that boasted an output of just 10 watts per channel.

However, when paired with 'sympathetic' speakers, the Pathos shone, displaying a breathtaking sense of insight and organisation, with a fine sense of timing and an immaculate handling of low-level dynamics.

It was happy playing all types of music, no matter what type of recording you fed it. When in full flow, it sounded brilliant.

If you were serious about vinyl playback, and had the kit to justify spending £17,000 on a phono amp, then the Aesthetix Io Eclipse was ideal.

One of the most natural-sounding phono amps we've heard, unleashing a great amount of detail, it shone no matter what music was being played.

The build and design were exquisite and if we had the spare change, we wouldn't have hesitated in snapping it up.

Back in 2013, we remarked that there was nothing quite like Burmester's 808 Mk5. Frighteningly expensive, this was a fully configurable preamp where you could add inputs (line level sources, phono modules), or switch outputs out to fit your system needs.

And the sound was terrific, offering a measure of control and composure, with high levels of detail along with a fluid and refined presentation. The price put it past most, but if you could get your hands on one, we imagine you wouldn't ever feel the need for another amplifier.

We weren't fully convinced by the original Supernait, which sounded less dynamic than we liked. This issue was not a problem for its successor, a "supremely stable, confident-sounding" amplifier that boasted excellent bass performance and surefooted rhythms.

Throw in the potential for upgrades and a terrific build, and the Supernait 2 was a superb amplifier that delivered Naim's "addictive sound" for a reasonable price.

From the moment the music started, this Gamut pre/power combination impressed.

Clean, crisp and clear, the detail resolution was superb, really digging into a recording and laying it bare. This was an insightful and honest amp that didn't "stamp its signature on the recording too heavily".

This is one of the finest pairings we've heard. It's so good in fact, that this duo remains part of our reference kit used for testing.

If you wanted high-end quality without having to buy separate components, this one-box solution worked a treat.

A valve-powered amp that could stand toe-to-toe with the finest pre/power combinations, it had nifty features, an excellent built-in DAC and fine headphone performance.

Nevertheless, it was the sound that gave the GSi75 distinction. With terrific dynamics, excellent detail and a transparent sound, when this amp was in full flow, there was no stopping it.

The best 12 TVs of What Hi-Fi?'s lifetime

The top 40 products of What Hi-Fi?'s lifetime