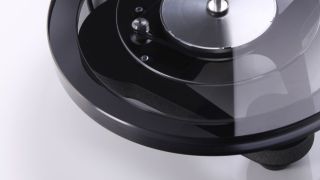 Vinyl is the music format that just won't go away. And we're very glad of that fact. But what good is loving vinyl without a having a decent turntable to play it on?

As we celebrate British Hi-Fi Week, we've taken a trip down memory lane to admire some of the best record players from British audio companies to have passed through our test rooms.

We've been reviewing audio equipment for the last 44 years, so while some companies are still going strong, others are sadly no longer with us. Regardless, all of these record players are brilliant examples of British audio engineering that well and truly stand the test of time.

And we're starting with one of the best, bar none. Linn's LP12 turntable was first introduced in 1972 and immediately proved popular with audiophiles. The range of compatible arms and cartridges the company made meant keeping this vinyl player up-to-date was satisfyingly easy. Almost every aspect of the design has been revised over the years, and while the early breed of the LP12s had a round and rich balance, modern incarnations have moved towards a more neutral, even-handed sound. All of them have been firm What Hi-Fi? favourites.

Since its introduction in 1978, the Rega Planar 3 has been a go-to turntable (and its modern incarnation is still going strong as a 2019 What Hi-Fi? award-winner). A respectable mid-market record player, the Planar 3 remains an easy-going, low-cost piece of kit that continues to keep our vinyl spinning - and since the company keeps refining the product, we imagine it'll stay that way for a while yet.

In 1982 the Gyrodec was a combination of great sound quality and artistic design. Bring the clock up to date and this player is still available - and it's a testament to its quality that it's essentially the same machine.

When it's up and running it sounds detailed, expressive and graceful, ready to put down other products costing plenty more. It's not plug-and-play - some assembly is required - but the instructions are clear, and there's a logic to its design that means it'll be spinning your discs in no time. And when it's spinning, there's nothing that looks quite like it.

Ariston perhaps became best known for the patent case, Ariston vs. Linn, over the thorny issue of the similarities between the Linn LP12 and the Ariston RD11. The patent was opposed but it led to the two companies striking out anew on their own. Both turned out a succession of excellent record players, with Linn of course still going strong to this day. We were fans of the Ariston RD40, RD80 and this, the affordable Q-Deck, as featured in this April 1990 round-up.

The Systemdek IIX became our Product of the Year in 1990, and it held that position for the next two years, and is rightly regarded by many as one of the finest turntables ever produced, and surely the finest to come out of Troon, Scotland. The record player's sound quality rose well above that of its closest rivals - timing was confident, and music sounded tuneful and easy-flowing - thanks to a series of innovative design features, such as a three-point sprung chassis.

The first time we heard this turntable, we awarded it a dismal two stars. We were unable to get vinyl turning steadily at 33rpm - which, we're sure you'll agree, is a bit of a disadvantage when it comes to playing LPs. But Pink Triangle brought the deck back to us with all problems solved - and we were thrilled to hear the Tarantella's open sound and refreshingly clear dynamics. Although the Pink Triangle company closed in 2003, there's no doubt the London manufacturer's legacy lives on.

Wilson Benesch was founded in 1989 in Sheffield and set itself apart from the crowd by using carbon fibre. The Full Circle was the "pinnacle of the company's art", as we referred to it in this 2001 piece, and used the company's carbon fibre suspension technique. The sonic result was a precise, spacious sound complete with a smooth treble and full bass.

Origin Live started life as a cable company, Cable Design, back in 1986, and didn't begin turning out turntables until 1991. We're glad the company did. When we first reviewed the Sovereign turntable, we said the first slab of vinyl to hit the deck had us "giggling like helium-addled hyenas". We've calmed ourselves a little since, but our enthusiasm hasn't dimmed.

This record player has effortless composure and gives tremendous insight into the emotion in a record's original recording, revealing little details we hadn't noticed even in some of our personal favourites. Vinyl junkies will always insist the black stuff sounds better than CD (or streaming), and this turntable will go a long way to proving that point.

You should never judge a book by its cover, and the same can be said for turntables. The Roksan Xerxes 20 looks to be your conventional, run-of-the-mill wooden-box turntable, but it is packed with clever engineering.

A motor that turns on its axis to compensate for torque fluctuations, a bearing designed to minimise noise, and rubber suspension tuned to dampen specific frequencies are just some of the little tricks Roksan's engineers built into this player. And they worked. The Xerxes 20 got all the essentials right - this is a player with first-class dynamics, and exceptional timing and rhythm.

We finish our list with yet another excellent Rega Research turntable. The Essex specialist has been delivering five-star products since its inception in 1973, and helped a few other brands with tonearms and record players along the way. Updated versions of its classic Planar 1, 2, 3 (see above), 6... we could go on... have continued an arguably unmatched dynasty of great decks.

But we love the latest Rega Planar 8 for doing something a little different and still delivering top-quality performance. There's a new main bearing assembly, a new three-piece platter, a new tonearm, and a new look that is like nothing else around. The sound? Stunning and perhaps unrivalled.