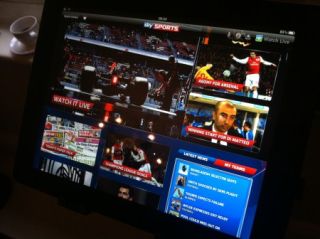 The Sky Sports for iPad app has been upgraded to offer an improved multimedia experience for Champions League football and Ryder Cup golf.

As well as multiple streams of live content, the enhanced Sky Sports for iPad app will incorporate live scores and live tweets for both events.

The upgrade follows the launch of split-screen viewing on Sky Sports for iPad for Sky's F1 coverage.

Key highlights of the new UEFA Champions League Event Centre on Sky Sports for iPad include:

A selection of matches to choose from, with a customisable split screen allowing users to watch any two at the same time, from a maximum of eight available
Goal alerts with video highlights for every goal in every live Sky Sports' match
A live feed of the latest tweets

Key highlights of the new 2012 Ryder Cup Match Centre on Sky Sports for iPad include:

Highlights from around the course

A live feed of the latest tweets

David Gibbs, director of Sky Sports Digital Media, commented: "We hope that the launch of the UEFA Champions League Event Centre on iPad will help fans enjoy the very best of our coverage with the ability to match-hop on their second screen without interrupting their main TV viewing.

"This update to the app follows the successful launch of the online Event Centre on www.skysports.com last season as well as the F1 and Barclays Premier League second screen offerings on the iPad earlier this year and we have seen a real appetite from fans to follow live sport on other devices in this way, at the same time as watching on their main screen."

Located within Sky Sports for iPad, the updated Second Screen experience is accessible at no extra cost to all Sky customers who take Sky Sports 1 and Sky Sports 2.