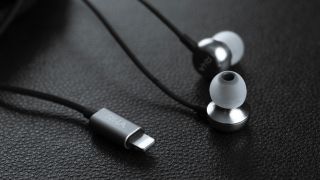 Made specifically for iPhone, iPad or iPod, the headphones are an extension to RHA's MA650 headphone series but feature that all-important Apple Lightning connection.

Practically identical in appearance to the MA650 Android headphones (except for that Lightning jack on the end). The new MA650i model is priced at £59.95, £10 more than the Android version (which is currently even cheaper on Amazon). The MA650 range also comes in a wireless option in white (with black available soon), for £99.95, should you feel like being brand agnostic. All the RHA headphones come with a three-year guarantee.

The RHA MA650i Apple earphones feature an aluminium housing, plus a three-button remote and mic that allows listeners to switch between calls and music, or ask, "Hey Siri, is it going to rain today?". You also get a mesh carry bag, various tips for a secure fit and even a clothing clip - should you choose to venture out regardless of what Siri says about the weather.

The MA650i headphones are available for pre-order today, and will be shipped and in stores on 23rd May.